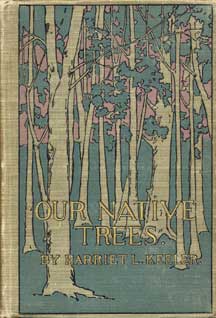 Our Native Trees and How to Identify Them

A Popular Study of Their Habits and Peculiarities

A facsimile reproduction of the original 1900 edition

Educator, author, and naturalist Harriet L. Keeler (1844–1921) was a prominent figure in her time. With this facsimile reprint of her first book written for a national audience, she once again is brought to the public’s attention.

An 1870 graduate of Oberlin College, Keeler devoted her career to service as a teacher and administrator in the Cleveland public schools. She was active in Cleveland civic life as well and was a prominent champion of women’s rights. But it was as a naturalist that she did her most distinctive work, preparing authoritative and literate field guides to native flora.

Our Native Trees and How to Identify Them, first published by Charles Scriber’s Sons in 1900, was warmly received at a time when America was rapidly urbanizing and public interest in conservation and the establishment of parks was growing. In her preface, Keeler explained that “the trees described . . . are those indigenous to the region ex-tending from the Atlantic Ocean to the Rocky Mountains and from Canada to the northern boundaries of the southern states; together with a few well-known and naturalized foreign trees.” Profusely illustrated and with a biographical introduction by Carol Poh Miller that illuminates Keeler’s life and accomplishments, this edition of Our Native Trees and How to Identify Them will aid a new generation eager to identify and thus better appreciate what they observe outdoors.

“The New York Times [in June 1900] pronounced it ‘well-written and thoroughly interesting’ . . . The reviewer concludes: ‘The book . . . should add new interest to the coming summer for many to whom Nature is practically a sealed book, as well as heighten the pleasure of others to whom she has long been dear.’”—from the Introduction

Carol Poh Miller is a historical consultant in Cleveland, Ohio, and has written widely on local history and architecture.

Anne Raver writes about gardens, landscape design, and the natural world for the New York Times.