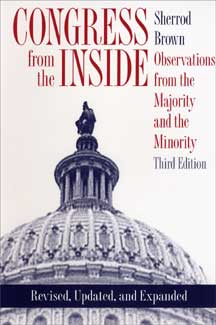 “While the larger story is well handled, it’s the details that make this so readable. Not for political junkies alone, but for anyone who enjoys good writing and a good story.”—Kirkus Reviews

“With good humor and a light touch, Brown, at times, gently pokes fun at himself and his colleagues while still maintaining respect for our government as an institution. Brown is an unabashed partisan, but he also goes out of his way at times to provide the reader with what he believes are both sides of an issue. In an era in which sound bites and scandals dominate the news, Brown has provided readers with a very real and rare treat; a well written and reflective book from an insider’s vantage point.”—Northwest Ohio Quarterly

Congress from the Inside has received high praise from the academic and political worlds for its intimate look at Washington politics. Ideal for both classroom and armchair reading, Brown’s book depicts the inner workings and deal-makings of Congress. He walks the reader through the crafting of legislation and tours the offices and meeting rooms where so much of the work of the legislature is done, introducing us to the names and faces of power. With incisive candor, Brown exposes the strengths and weaknesses, successes and failures, diversity and elitism of the U. S. Congress.

This third edition of Congress from the Inside is completely revised, updated, and expanded to include five new chapters. Now in his sixth term, Congressman Brown discusses the 2000 election, September 11, and redistricting. He also examines how Congress is influenced by the drug industry, the public health agenda, and the war in Iraq.

Having served six terms as U.S. representative from Ohio’s 13th congressional district, Democrat Sherrod Brown was elected to the U.S. Senate in 2006.

Having served six terms as U.S. representative from Ohio’s 13th congressional district, Democrat Sherrod Brown was elected to the U.S. Senate in 2006.