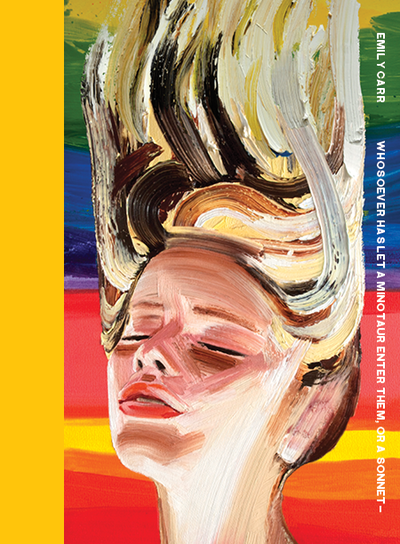 Whosoever Has Let A Minotaur Enter Them, Or A Sonnet

How does a love poet fall out of her marriage and back in love with the world? What happens when you grow up to be the kind of person who”? These fairytales are for the heartbreakers as much as the heartbroken, for those smitten with wanderlust, for those who believe in loving this world through art.

Carr’s swell of gorgeous psychedelia is presented in a lavish book-object befitting the work’s interconnected, page-defying sweep of line upon line:

between her thighs, the buffalo holding sky.
saucers of mountain sway. deities spill, shining & suffering
not forgetting we can’t everwhose fury sings like eagles
skeletons unlean from fruit trees, falling
like white gunsmoke, we want/         to be here. listen.
the wind has blown all the birds from our hair.

Emily Carr lives in Oregon. She’s passionate about the rediscovery of Mississippi poet besmilr brigham, the sexual politics of meat, the limits of Achilles’ honesty and the problem of Chaucer’s spring, unposted love letters, cannibal chickens and a ship too late to save the drowning witch.

Carr has been named a finalist in seven national book contests, including the 2011 National Poetry Series. Her second collection, 13 Ways of Happily: Books 1 & 2 (Parlor Press 2011), was chosen by Cole Swensen as the winner of the 2009 New Measures Poetry Prize. Carr has received fellowships from the Vermont Studio Center, the Virginia Center for the Creative Arts, the Jack Kerouac House, Writers in the Heartland, and Camac Centre d’Art. The poet received her BA from the University of Missouri, her MFA from the University of North Carolina-Wilmington, and her Ph.D. from the University of Calgary in 2010. She is currently the director of the Master of Fine Arts in Creative Writing at Oregon State University-Cascades.