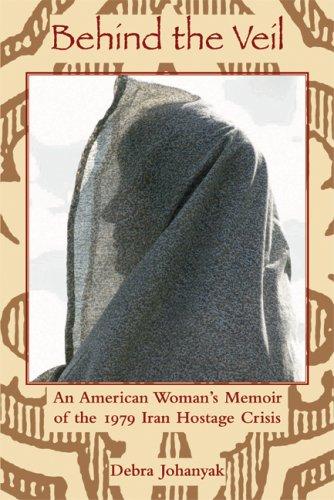 An American Woman's Memoir of the 1979 Iran Hostage Crisis

Married to an Iranian, and mother of two young children, Debra Johanyak was a teaching assistant at Iran’s Shiraz University when the American Embassy in Tehran was taken over by militants on November 4, 1979.

Behind the Veil tells the story of a woman with dual citizenship who loves both the United States and Iran but must choose between them when the embassy takeover triggers an international and personal crisis. Johanyak recounts the events of her life in Iran, drawing on her own journal and family letters, as well as public news sources. Against a background of increasing political and religious tensions, she gives the reader vivid pictures of the world she experienced there; in good times and bad, tribal customs in a village wedding, sandstorms, the warmth of the large Iranian family she married into, the threatening pressure of Islamic fundamentalists. Coming face to face with dramatic changes in Iran’s government and society, Johanyak must also confront her own identity.

For anyone who has ever wanted to look behind the veil of media imagery and see life in Iran before and after the 1979 revolution, Debra Johanyak’s book offers a clear, intimate, and unflinching view of a culture in conflict, as she comes to terms with her religious faith, political views, and feminist values. Behind the Veil chronicles a dangerous time in Iran and America’s shared history, and brings us along on the spiritual and intellectual pilgrimage of one Midwestern woman finding her way in a volatile world.

Dr. Debra Johanyak was raised in Akron, Ohio. Her graduate studies included a year in Shiraz, Iran, where she held a teaching assistantship and witnessed the 1979 Iran hostage crisis. Debra began her professional career as an English instructor, and later, as an assistant professor at Kent State University before coming to the University of Akron Wayne College, where she currently is a professor of English. In addition to having her book Shakespeare’s World published by Prentice Hall in 2004, several of her short stories and dozens of her articles have appeared in various literary magazines and journals.