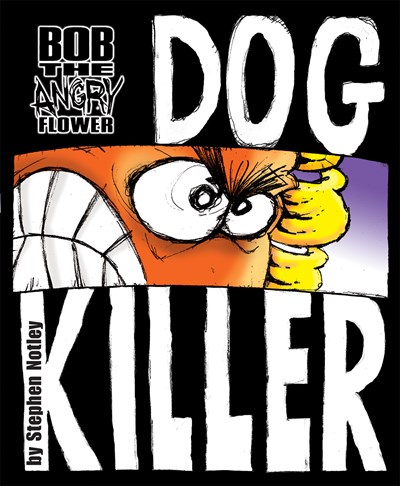 Combining the politics of The Boondocks, the surrealism of Zippy the Pinhead, and the pop-culture madness of The Simpsons, Bob the Angry Flower is an edgy, trenchantly political, and achingly funny comic strip. Whether he’s building killer robots, running for pope, or just getting creamed at 20 Questions, Bob is locked, loaded, and ready to destroy the Earth?unless there’s something good on TV. Bob the Angry Flower: Dog Killer is exactly what disaffected teenagers, jaded grownups, disgruntled geeks, and Peter Pans of all ages have been waiting for: a flower with a brilliant mind, a bipolar temperament, and the attention span of a five-year-old loaded up on sugar and Saturday-morning cartoons.

This first U.S.-published collection of Canadian cartoonist Stephen Notley’s syndicated masterpiece is a crazed love letter to monster movies, petty demagogues, and vegetarian tyrants alike. Unpredictable, original, and wholly outrageous, Bob is coming to America?and not a moment too soon.

According to Stephen Notley, he was born Canadian, in Canada. He lived there for years, drew cartoons, and attended schools, among them Fairview High School and the University of Alberta. Continuing to draw cartoons into his early thirties, he avoided useful work for many years until eventually moving to Seattle to begin employment at PopCap Games, which is where he is and what he’s doing now. Somewhere along the way, he published eight collections of his Bob the Angry Flower cartoon strip.