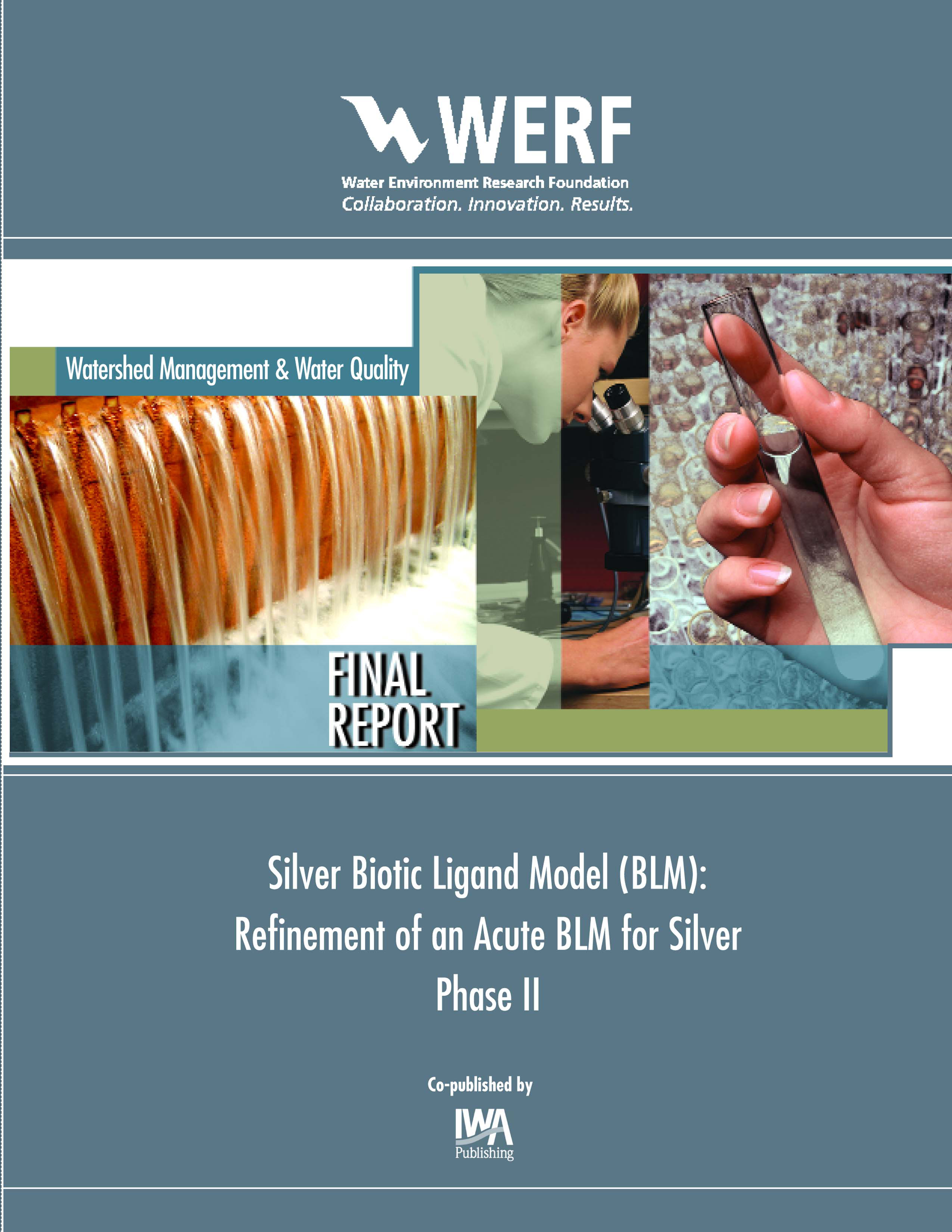 Refinement of an Acute BLM for Silver, Phase 2

The biotic ligand model (BLM) is a computational tool that may be used to predict toxic effect levels of metals, including Ag. The BLM considers the effect of site-specific water quality characteristics on Ag speciation and bioavailability. This provides a basis for extrapolating from laboratory waters, used for most Ag toxicity tests, to natural waters, where the bioavailability and toxicity of Ag may differ. The original version of the BLM for the acute toxicity of Ag was reviewed by the USEPA Science Advisory Board (SAB) in 1999 and they recommended the completion of additional Ag chemistry and toxicity studies to provide data to test and refine the model.
This project was completed to satisfy these recommendations. A chemistry component was completed to improve the representation of Ag speciation in natural waters and to characterize the important effect of sulfide on Ag bioavailability. These investigations added to the information that was available to characterize Ag chemistry and provided a basis for updating the earlier version of the Ag BLM. The BLM was also calibrated to laboratory toxicity data that were generated for a Ag-sensitive invertebrate, Ceriodaphnia dubia, a cladoceran that had previously been tested to only a limited degree.
The studies were carried out in laboratory waters in which the chemistry was systematically varied to provide a basis for calibration of the BLM to the toxicity data for C. dubia. Toxicity tests were also performed with both Pimephales promelas and C. dubia in natural water samples that were well characterized chemically, with the data then used to test the model. While the C. dubia BLM results were relatively successful at simulating the observed effect levels the P. promelas results highlighted the need for further testing and refinement of the Ag BLM as it was applied to this fish species. Physiological tests were performed to explore the apparent increase in sensitivity of P. promelas in some of the test waters that were relatively low in ionic strength.
It was determined that acclimation to such low ionic strength waters, in the absence of Ag, did not significantly reduce their sensitivity to Ag. Rather, it appeared that any benefit that may have been realized by acclimation, such as an enhanced ability to upregulate ion uptake rates in low ionic strength waters, was apparently offset by a concomitant increase in the rate at which Ag was accumulated. The Ag BLM was modified to account for the effect of low ionic strength water on the sensitivity to Ag of > 4-day old P. promelas. This led to an improved ability of the BLM to predict P. promelas effect levels in the natural waters. Physiological tests were also performed to investigate the apparent species-specific protection against Ag toxicity that is provided by chloride. Investigations with P. promelas suggested that the differences in degree of protection may be related to differences in how Ag affects the ionoregulation of Na+ and Cl- by different fish species. Although questions remain with regard to chloride, it appears that the BLM is able to predict this response reasonably well, particularly for the relatively sensitive <4 day old P. promelas. In summary, the WERF program yielded an improved chemistry and toxicity database, including data over an extended range of water quality characteristics and for an additional Ag-sensitive invertebrate, thereby providing a basis for refining the acute Ag BLM and improving its overall predictive ability.