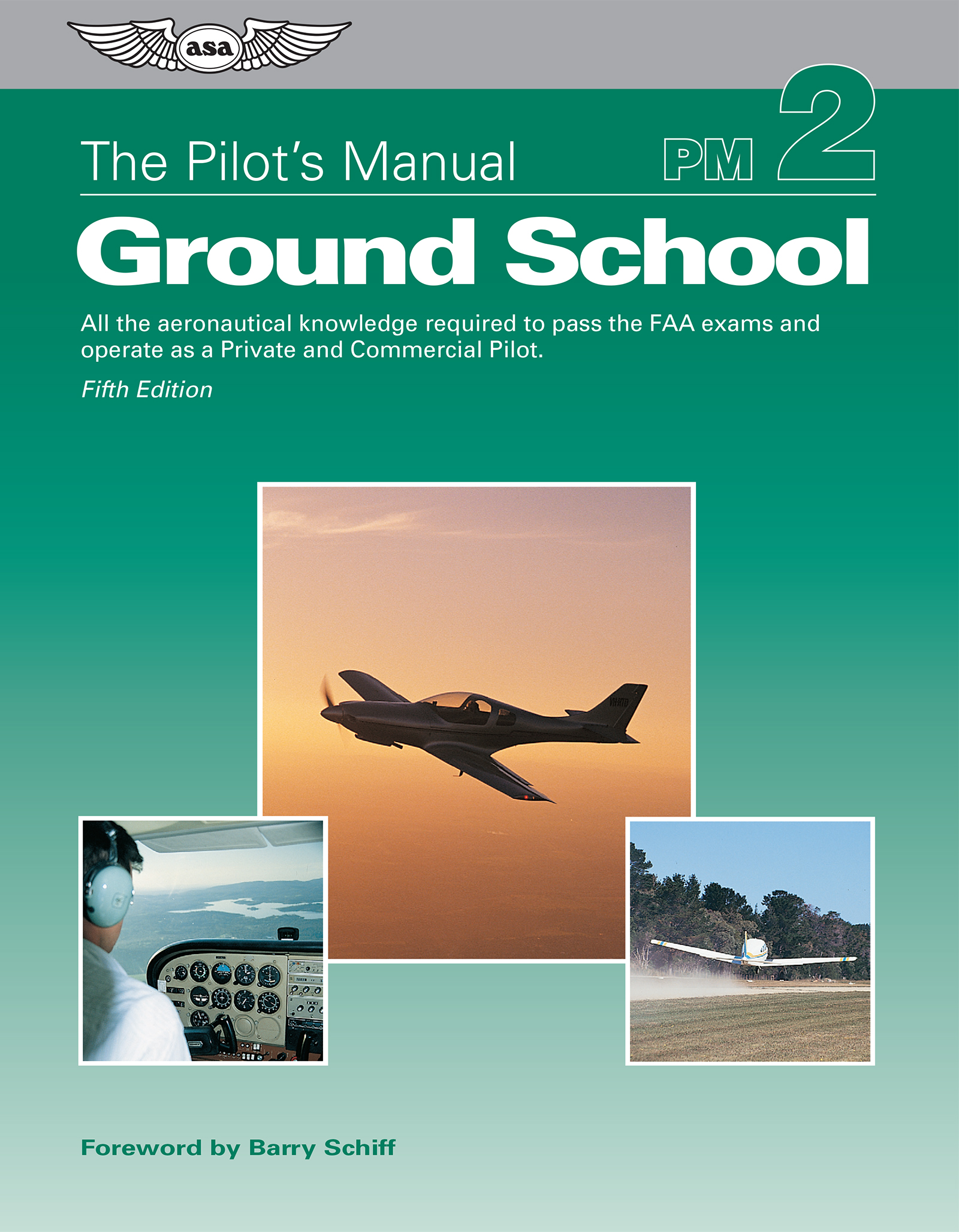 The Pilot’s Manual: Ground School will walk you through everything you need to know to pass your FAA Knowledge Exams and earn your pilot certificate. The Fifth Edition of this comprehensive textbook has been updated to reflect current rules, procedures, FAA Airman Certification Standards and technologies including drones, ADS-B, weather services available to pilots and BasicMed.

Subjects covered include aerodynamics, the airplane and its performance factors, physiological factors affecting the pilot, weather, regulations, charts and airspace, airport operations, navigation, and flight planning, including specific instructions on how to use the flight computer. Helpful marginal notes are provided for quick definitions of terms, further emphasis of key points, and mnemonic devices that can be of tremendous benefit to study. Each chapter closes with review questions highlighting the important facts.

Ninety percent of the material is for the private pilot applicant, and the remaining ten percent, well-separated, will raise you to the commercial pilot certificate standard.

David Robson is a career aviator having been nurtured on balsa wood, dope (the legal kind) and tissue paper, and currently holds an ATP certificate with instructor ratings. He served as a fighter pilot and test pilot for the Royal Australian Air Force, completed a tour in Vietnam as a forward air controller flying the USAF O-2A and was a member of the Mirage formation acrobatic team, the Deltas. After retiring from the Air Force, he became a civilian instructor and lecturer for the Australian Aviation College, and editor for Aviation Safety Digest, which won the Flight Safety Foundation’s international award. He was awarded the Australian Aviation Safety Foundation’s Certificate of Air Safety.

Richard Coffey is a commercial pilot and flight instructor with instrument, multiengine, and sea plane privileges. He has also been an aviation writer and editor since 1976 and is the author of the Skylane Pilot’s Companion (1996). He has written for Airports Services Management magazine, Aviation Consumer, Aviation Safety and IFR magazines. He regularly flies Cessna 210s and 182s, although he has a weakness for older Beech Bonanzas and has owned an M model.

Dr. DeRemer was recognized as “Seaplane Pilot of the Year” by the Seaplane Pilots Association, and inducted into the EAA-NAFI Flight Instructor Hall of Fame. He was named “Professor Emeritus of Aviation” by the University of North Dakota College of Aerospace Sciences after 20 years of teaching aviation subjects at the university level. During his career, he has served as corporate pilot, agricultural pilot and chief pilot for his own and other companies. He has logged over 20,000 hours total time in general aviation aircraft of many types. Dale holds ATP, CFI-A, CFI-H, CFI-I and MEI licenses with single- and multi-engine land and sea, rotorcraft-helicopter and instrument ratings.

James Johnson is the Director of Aviation Training for ASA. He has accumulated many years of aviation industry experience, from flight and ground instruction to working within corporate flight departments. James received a B.S. in Aeronautics with minors in Aviation Safety and Airport Management from Embry-Riddle Aeronautical University. He holds certificates for Commercial Pilot, Advanced Ground and Instrument Instructor, as well as Remote Pilot sUAS.

Bureau Chief, Safety and Education for the Montana Aeronautics Division of Helena, Jeanne is also the Chief Pilot and Mountain Flight Instructor. She coordinates air search for the State of Montana and coordinates Mountain Search Pilot Clinics, Flight Instructor Refresher Clinics, Winter Survival, Density Altitude Clinics, Aviation Education Workshops, and Aviation Careers Programs. Jeanne is a Young Eagles Flight Leader (EAA) and has flown over 2,900 students; she is the recipient of the 2003 EAA Freedom of Flight Award, 2002 Women in Aviation Educator of the Year Award, and 2000 FAA Aviation Educator of the Year for the Northwest Region.

Dennis Newton holds ATP and CFI certificates, and is an FAA-Designated Engineering Representative Flight Test Pilot for both small and transport airplanes. A few of Mr. Newton’s past achievements include meteorologist, weather research pilot, and engineering test pilot; he has also served as a consultant to government and industry on icing certification and flight testing. Dennis Newton is the author of numerous papers and aviation magazine articles on icing and other weather topics. He holds a B.S. in Engineering and an M.S. in Meteorology. Mr. Newton is also a member of the American Institute of Aeronautics and Astronautics, and the Society of Experimental Test Pilots.

Phillip J. Poynor, J.D., FAA/Industry 2001 Flight Instructor of the Year, holds an ATP pilot certificate, has been captain qualified on Part 135 carriers, and has taught courses on Air Carrier Operations and Advanced Systems for many years at three major aviation colleges. Phil is an attorney with a practice limited to aviation matters. He was a staff attorney in the flight operations department of a major, international airline. He began his flying career over 38 years ago and has been instructing for more than 30 years. Phil received the Excellence in Pilot Training Award from the National Air Transportation Association in 1998 and the Chancellor’s Award for Excellence in Teaching from SUNY in 1994. He currently volunteers as Vice PresidentÑGovernment and Industry Affairs for the National Association of Flight Instructors, for which he is also an emeritus member of the Board of Directors.

Barry Schiff has over 26,000 hours in more than 300 types of aircraft. He is retired from Trans World Airlines, where he flew everything from the Lockheed Constellation to the Boeing 747 and was a check captain on the Boeing 767. He earned every available FAA category and class rating (except airship) and every possible instructor’s rating. He also received numerous honors for his contributions to aviation. An award-winning journalist and author, he is well known to flying audiences for his many articles published in some 90 aviation periodicals, notably AOPA Pilot, of which he is a contributing editor.

James Warren Smith is the Vice President of Flight Operations and Chief Pilot for the Flightstar Corporation located in Savoy, IL. With over 8,000 hours flown and over 3,000 hours of flight training given, Warren currently flies a Falcon 900 internationally and serves as a Designated Pilot Examiner (DPE) for the FAA. Warren has been a certificated flight instructor (CFI) for over 20 years and has served as the chief flight instructor for several 141 flight schools. In addition, Warren has served as Chairman of the National Air Transportation Association (NATA) Flight Training Committee dealing with flight training issues on a national level.

As General Manager of ASA, Jackie Spanitz oversees maintenance and development of more than 1,000 titles and pilot supplies in the ASA product line. Ms. Spanitz has worked with airman training and testing for over 25 years, including participation in the Airman Certification Standards development committees. Jackie holds a B.S. in Aviation Technology from Western Michigan University, a M.S. in Aeronautical Science from Embry-Riddle Aeronautical University and Instructor, Commercial and Remote Pilot certificates. She is the author of Guide to the Flight Review and the technical editor for ASA’s Test Prep and FAR/AIM series.

Richard L. Taylor is an award-winning author of many articles and 14 aviation books. He retired from the Air Force Reserve as a major, having earned Command Pilot status. Now associate professor emeritus, Taylor was director of flight operations and training and taught at all levels of the flight curriculum at the Ohio State University. He is the founder and editor of The Pilot’s Audio Update, a monthly audio tape cassette service published continuously since 1978. Taylor has accumulated nearly 13,000 hours of pilot time in a wide variety of aircraft including gliders, helicopters, amphibians, turboprops, jets, and most general aviation light airplanes. He remains active in accident investigation and as an aviation consultant in Dublin, Ohio.

Mike Wiggins has been with Embry-Riddle Aeronautical University for over 27 years. He is currently a tenured professor in the Aeronautical Science Department and the director of the newly created campus Center for Teaching and Learning, having taught in the classroom, been a member of the ERAU Flight Department, and active with the National Intercollegiate Flying Association (NIFA). He holds a Doctorate in Education from Oklahoma State University, a Masters Degree in Business Administration, and a Bachelor of Science Degree in Aeronautical Science from Embry-Riddle Aeronautical University. He holds an ATP certificate with Boeing 757 and 767 type-ratings, and flight instructor and ground instructor certificates.

Thomas Wild is a full professor at Purdue University who holds an Aviation Maintenance Technician certificate with Inspection Authorization. He is also a Designated Mechanics Examiner, and a Flight Engineer. With numerous awards for his contributions to education, Tom has been teaching aviation technology at Purdue University for more than 25 years. He is the Managing Editor for the ATEC Journal, has written many articles, textbooks, and conducted seminars for the industry. He is a past member of the Board of Directors for Professional Aviation Maintenance Association (PAMA).