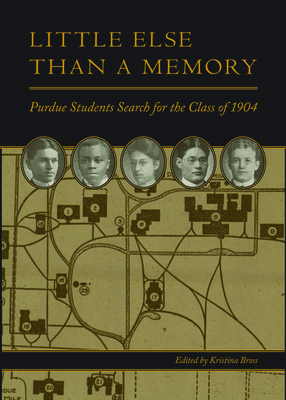 Little Else Than a Memory

Purdue Students Search for the Class of 1904

Completely produced by students in the Purdue University Honors College, this book contains ten essays by undergraduate students of today about their forebears in the class of 1904. Two Purdue faculty members have provided a contextualizing introduction and reflective epilogue. Not only are the biographical essays written by students, but the editing, typesetting, and design of this book were also the work of Purdue freshmen and sophomores, participants in an honors course in publishing who were supervised by the staff of Purdue University Press. Through their individual studies, the authors of the biographies inside this book were led in interesting and very different directions. From a double-name conundrum to intimate connections with their subjects' kin, their archival research was rife with unexpected twists and turns.Although many differences between modern-day university culture and the campus of 1904 emerge, the similarities were far more profound. Surprising diversity existed even at the dawn of the twentieth century. Students intimately tracked the lives of African Americans, women, farm kids, immigrants, international students, and inner-city teens, all with one thing in common-a Purdue education. This study of Purdue University's 1904 campus culture and student body gives an insightful look into what the early twentieth-century atmosphere was really like-and it might not be exactly what you'd think.

Kristina Bross completed her PhD at the University of Chicago in 1997 and held an appointment at California Polytechnic State University until 1999, when she joined the Purdue faculty. Her books include Dry Bones and Indian Sermons: Praying Indians in Colonial America (Cornell, 2004) and Early Native Literacies in New England: A Documentary and Critical Anthology (U Mass, 2008, co-edited with Hilary Wyss).