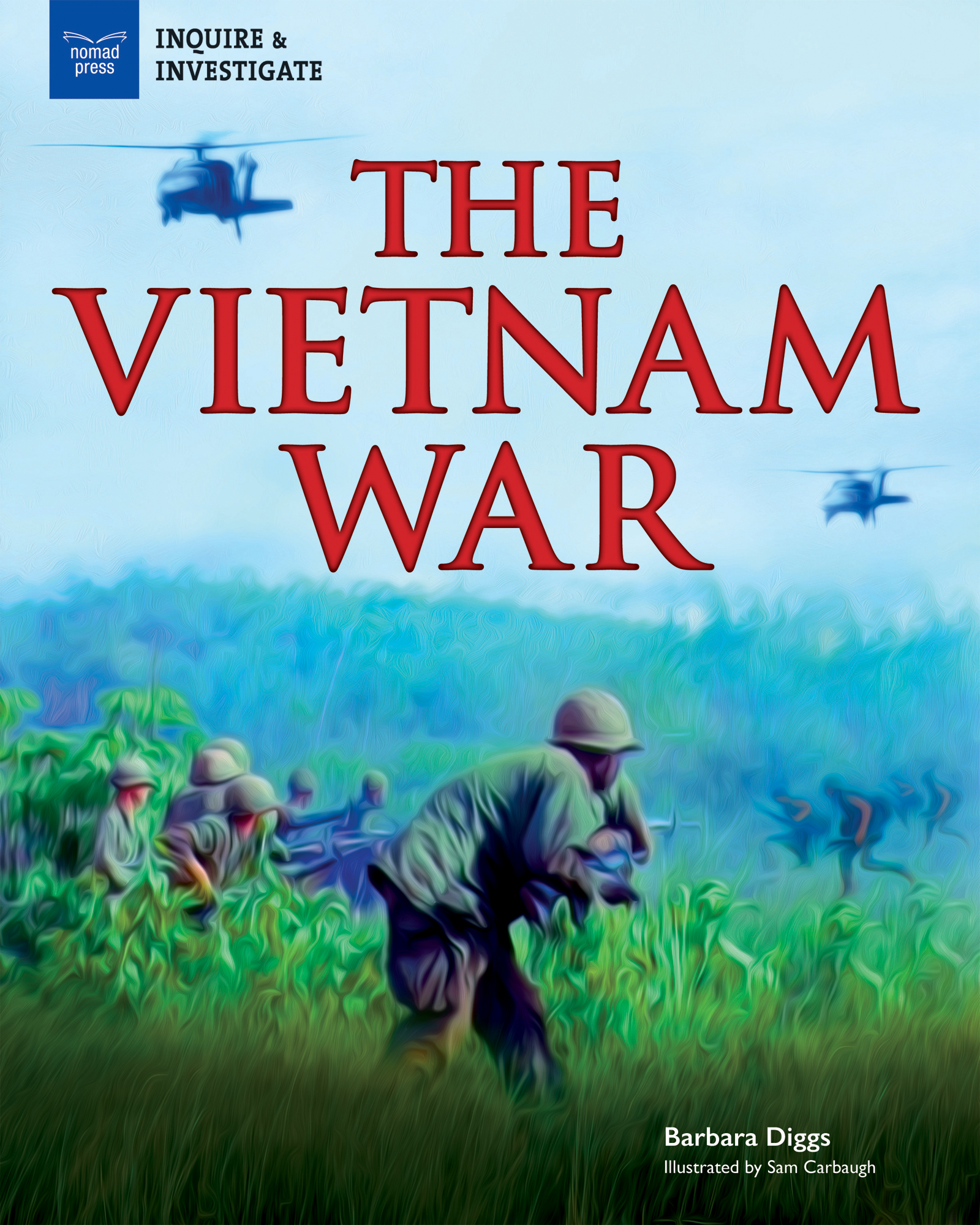 More than 58,000 American troops and military personnel died in the humid jungles and muddy rivers of Vietnam during the 20-year conflict called the Vietnam War. Why? What were they fighting for? And how could the world’s most powerful and technologically advanced military be defeated by a small, poverty-stricken country? These questions have haunted the U.S. government, the military, and the American public for nearly a half century.

In The Vietnam War, kids ages 12 to 15 explore the global conditions and history that gave rise to the Vietnam War, the reasons why the United States became increasingly embroiled in the conflict, and the varied causes of its shocking defeat. As readers learn about how the fear of the spread of communism spurred the United States to enter a war that was erupting on the other side of the world, they find themselves immersed in the mood and mindset of the Vietnam Era.

Through links to online primary sources, including speeches, letters, photos, and songs, readers become familiar with the reality of combat life for young American soldiers, the frustration of military advisors as they failed to subdue the Viet Cong, and the empty promises made by U.S. presidents to soothe an uneasy public. The Vietnam War also pays close attention to the development of a massive antiwar movement and counterculture that divided the country into “hawks” and “doves.” In-depth essential questions help middle schoolers analyze primary sources and develop their own evidence-supported views on a range of issues.

The Vietnam War also fosters critical thinking skills through projects such as creating antiwar and pro-war demonstration slogans, writing letters from the perspective of a U.S. soldier and a south Vietnamese citizen, and building arguments for and against the media’s coverage of the war. Additional learning materials include engaging illustrations, maps, a glossary, a bibliography, and resources for further independent learning.

The Vietnam War is one book in a set of four that explore great events of the twentieth century. Inquire and Investigate titles in this set include The Vietnam War; World War II: From the Rise of the Nazi Party to the Dropping of the Atomic Bomb; Globalization: Why We Care About Faraway Events; and The Space Race: How the Cold War Put Humans on the Moon.

Nomad Press books in the Inquire & Investigate series integrate content with participation, encouraging older readers to engage in student-directed learning as opposed to teacher-guided instruction. This student-centered approach provides readers with the tools they need to become inquiry-based learners. Common Core State Standards, the Next Generation Science Standards, and STEM Education all place project-based learning as key building blocks in education. Combining content with inquiry-based projects stimulates learning and makes it active and alive. Consistent with our other series, all of the activities in the books in the Inquire & Investigate series are hands-on, challenging readers to develop and test their own hypotheses, ask their own questions, and formulate their own solutions. In the process, readers learn how to analyze, evaluate, and present the data they collect. As informational texts our books provide key ideas and details from which readers can work out their own inferences. Nomad’s unique approach simultaneously grounds kids in factual knowledge while allowing them the space to be curious, creative, and critical thinkers. Soon they’ll be thinking like scientists by questioning things around them and considering new approaches.

Barbara Diggs is a non-fiction writer who has written a range of historical articles for children. Her work has been featured in Learning Through History Magazine, History Magazine, and Renaissance, among others. A graduate of Stanford Law School, Barbara practiced law in New York for several years before becoming a professional writer. She and her family currently split their time between Paris, France, and Washington DC.