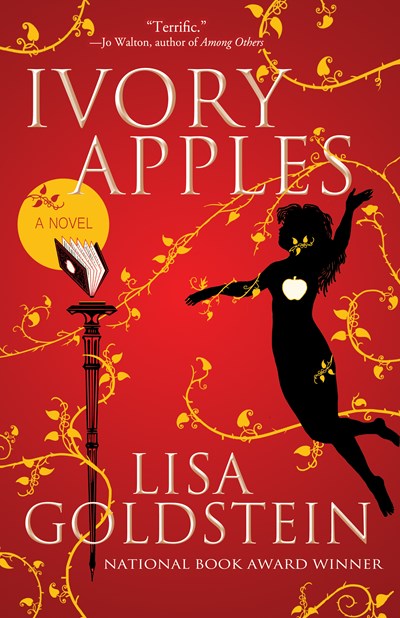 “Ivory Apples is a legendary fantasy novel of the great-nieces of their Great-Aunt Adela, almost as celebrated and mysterious as the book itself, and the charming superfan Kate Burden—a sort of wicked Mary Poppins on the dogged hunt for hidden magic. But magic has always its own desires, far beyond any fan's dream.”
—Peter S. Beagle, author of The Last Unicorn and Summerlong

Ivy and her sisters have a secret: their reclusive Great-Aunt is actually Adela Martin, inspired author of the fantasy classic, Ivory Apples. Generations of obsessive fans have searched for Adela, poring over her letters, sharing their theories online, and gathering at book conventions. It is just a matter of time before one fan gets too close.

So when the seemingly-perfect Kate Burden appears at the local park, Ivy knows that something isn’t right. Kate has charmed the entire family, but she is suspiciously curious about Ivory Apples. And Ivy must protect what she and her Great-Aunt share: magic that is real, untamable, and—despite anyone’s desire—always prefers choosing its own vessel.

Lisa Goldstein is the National Book Award-winning of The Red Magician and The Uncertain Places. She has published eleven novels and two short fiction collections, including Dark Cities Underground, The Alchemist’s Door, and Travellers in Magic. Her short fiction has appeared in such magazines as Interzone and Asimov’s Science Fiction, and in anthologies including The Norton Book of Science Fiction and The Year’s Best Fantasy series. Goldstein is also a founding member of the women’s speculative fiction co-operative the Brazen Hussies. She lives in Oakland, California.