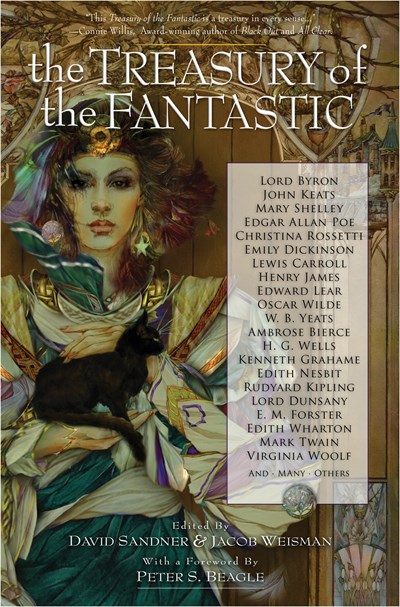 Treasury of the Fantastic

“Verdict: This is an important collection for all lovers of fantasy and literature.”
—Library Journal

“A marvelous mix of classics and rarely seen works, bibliophile's finds and old favorites . . . a treasury in every sense and a treasure!”
-Connie Willis, author of Doomsday Book

The fantastic, the supernatural, the poetic, and the macabre entwine in this incomparable culmination of storytelling. Imaginative stories of wit and intelligence weave through vivid landscapes that are alternately wondrous and terrifying. As major literary figures from the nineteenth and twentieth centuries?from Alfred, Lord Tennyson and Edith Wharton to Edgar Allan Poe and Oscar Wilde?these masters of English and American literature created unforgettable tales where goblins and imps comingle with humans from all walks of life.

This deftly curated assemblage of notable classics and unexpected gems from the pre-Tolkien era will captivate and enchant readers. Forerunners of today’s speculative fiction, these are the authors that changed the fantasy genre forever.

David Sandner is the author of the scholarly book The Fantastic Sublime: Romanticism and Transcendence in Nineteenth-Century Children’s Fantasy Literature and the editor of Fantastic Literature: A Critical Reader. His work has appeared in Realms of Fantasy, Asimov’s Science Fiction, Pulphouse, Weird Tales, and the anthology Baseball Fantastic edited by W. P. Kinsella. Sandner is a professor at California State University Fullerton, where he teaches nineteenth-century British Literature, children’s literature, gothic, science fiction, and fantastic literature.

Jacob Weisman is the World Fantasy Award?nominated editor and publisher at Tachyon Publications, which he founded in 1995. He is the series editor for several anthologies, including The Secret History of Fantasy, The Urban Fantasy Anthology, and Crucified Dreams: Tales of Urban Horror. His writing has appeared in The Nation, Realms of Fantasy, the Courier-Journal, Seattle Weekly, the Cooper Point Journal,, and in the college textbook Sport in Contemporary Society.