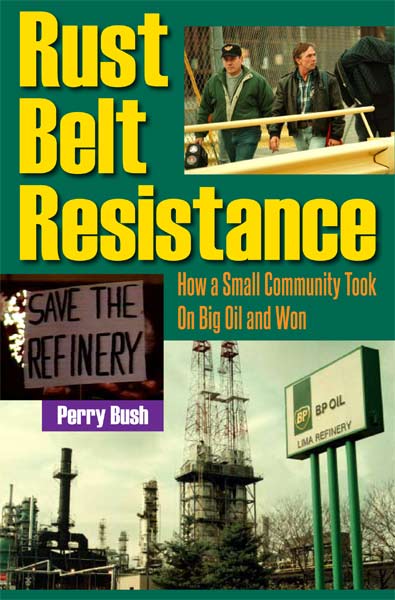 How a Small Community Took on Big Oil and Won

Since the 1970s, urban communities across the country have had to face the wrenching process of economic restructuring. As the media announce the latest plant closings and politicians slam each other for outsourcing jobs, events are too often framed with a kind of economic determinism that denies agency to individual communities. To what degree can industrial cities in such an era still imagine themselves as authors of their own economic fates?

In Rust Belt Resistance, author Perry Bush explores this question by focusing on the small midwestern city of Lima, Ohio. When British Petroleum (BP) announced late in 1996 that it would close and demolish its refinery there—which at the time employed 500 people with a $31.5 million payroll—economic desperation loomed. Lima’s story, however, deviated from the usual sad narrative of other Midwest plant closures and began to assume a drama of its own.

Led by an unlikely cast of characters—an uncommonly stubborn set of civic leaders, a conservative local newspaper publisher, and the city’s determined and progressive mayor—Lima refused to take its place quietly on the industrial scrap heap. Instead of collapsing in despair, the refinery’s workers continued to function as a model of industrial efficiency and hard work, partly in a determined effort to build profitability and preserve their jobs and also because hard work was the essence and tradition of this blue-collar town.

In a story replete with a number of dramatic twists and turns, Bush describes how this collection of individuals led a resistant multinational corporation to a financial deal it could not refuse, located an acceptable buyer for the refinery, and saved not only a sizable share of the city’s financial foundation but also the community’s identity and self-respect. Rust Belt Resistance is a valuable instructional lesson for business and community leaders, scholars, and anyone interested in the continuing viability of American industrial cities.

Perry Bush is professor of history at Bluffton University, a short drive from Lima, Ohio, and is a local political activist. He received his Ph.D. in history from Carnegie Mellon University and is the author of two previous books, along with thirty articles and book reviews in both the academic and popular press.