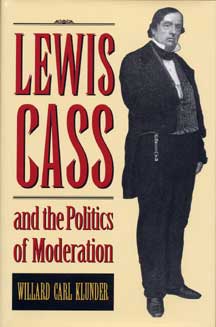 Lewis Cass and the Politics of Moderation

Drawing upon Lewis Cass's voluminous private papers, correspondence, and published works, Willard Carl Klunder provides the first comprehensive biography of the man who was the Democratic spokesman for the Old Northwest for more than half a century. A champion of spread-eagle expansionism and an ardent nationalist, Cass subscribed tot he Jeffersonian political philosophy, embracing the principles of individual liberty; the sovereignty of the people; equality of rights and opportunities for all citizens; and a strictly construed and balanced constitutional government of limited powers.

Cass was a significant player in American politics, from the Burr conspiracy during Thomas Jefferson's presidency, through the Trent affair of the Lincoln administration. During his career, he served as a prosecuting attorney, state legislator, federal marshal, army officer, territorial governor, secretary of war, minister to France, United States senator, and secretary of state. More than any other individual, he was responsible for the growth of Michigan from a frontier territory to the threshold of statehood.

Aptly names the "father of popular sovereignty," Cass championed this doctrine that provided an expedient solution to the volatile question of slavery expansion for a decade. A vehement opponent of slavery, Cass supported the right of citizens in each state or territory to decide the question for themselves.

Klunder presents a balanced and insightful look into the character and career of this significant 19th century Michigan politician. Lewis Cass emerges as a bright symbol of antebellum nationalism and political moderation. Lewis Cass and the Politics of Moderation will be of interest to anyone concerned with American biography, White-Indian relations, and the coming of the Civil War.