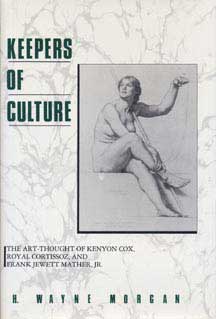 The conflict between modern and traditional art is one of the best known episodes in American cultural history. The modernists on the war in the sense that their styles and attitudes of mind dominated the discussion and production of new art. But the traditionalists remained strong in the arenas of public opinion and taste. It is a testament to the importance of the ideas involved that the basic issues are not yet settled in the larger cultural world. Kenyon Cox, a painter as well as critic, revealed a steadfast devotion to the ideals of a high art tradition, derived in his later years chiefly from admiration for the Italian Renaissance. He knew western art history, surveyed the current art scene in many reviews and analytical essays, and wrote with careful attention to the canons of scholarship. Royals Cartissoz, the art editor of the New York Tribune for over fifty years, was an appreciator and connoisseur. His belief in “beauty” in a well-done and recognizable form left him open to more innovation than was the case with Cox. He based his views on a self-confessed ideal of common sense that left the art experience open to any sensitive person. He was well suited to speak to and for the growing middle class in the Progressive era. This viewpoint was equally adaptable, if more debatable intellectually, when modernism triumphed. The fact that he remained a significant figure in art circles long after his tastes ceased to be dominant, testified to the nature of the audience for whom and to whom he spoke. Frank Jewett Mather, Jr., was the most realistic of these critics in estimating how art appealed in society. He knew a lot about many things and was concerned to see that the arts remained integrated in public esteem and thought. Mather took comfort from the history of art, which revealed to him that great works and their creators could survive time and criticism. This sense of historical process and his great need for the unifying power of art experience let Mather escape the bitterness that so affected Cox, and to a lesser extent Cortissoz, as tastes changed. The artist’s mission was to maintain and extend forms of art that promoted order and integration in society and in individual personalities. Society in turn had to see the artist as a harbinger of an intensified emotional life, but which accommodated changed perception in constructive ways. The chief fear of the traditionalists was that the new art, which seemed shocking in form and disruptive in intent, would separate artist and public to the detriment of both.