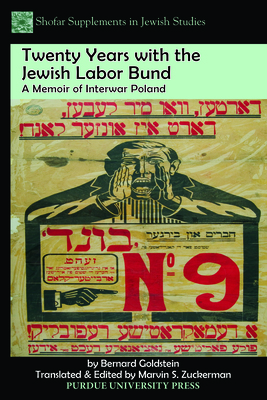 A Memoir of Interwar Poland

Bernard Goldstein’s memoir describes a hard world of taverns, toughs, thieves, and prostitutes; of slaughterhouse workers, handcart porters, and wagon drivers; and of fist-and gunfights with everyone from anti-Semites and Communists to hostile police, which is to say that it depicts a totally different view of life in prewar Poland than the one usually portrayed. As such, the book offers a corrective view in the form of social history, one that commands attention and demands respect for the vitality and activism of the generation of Polish Jews so brutally annihilated by the barbarism of the Nazis.In Warsaw, a city with over 300,000 Jews (one third of the population), Bernstein was the Jewish Labor Bund’s “enforcer,” organizer, and head of their militia—the one who carried out daily, on-the-street organization of unions; the fighting off of Communists, Polish anti-Semitic hooligans, and antagonistic police; marshaling and protecting demonstrations; and even settling family disputes, some of them arising from the new secular, socialist culture being fostered by the Bund.Goldstein’s is a portrait of tough Jews willing to do battle—worldly, modern individuals dedicated to their folk culture and the survival of their people. It delivers an unparalleled street-level view of vibrant Jewish life in Poland between the wars: of Jewish masses entering modern life, of Jewish workers fighting for their rights, of optimism, of greater assertiveness and self-confidence, of armed combat, and even of scenes depicting the seamy, semi-criminal elements. It provides a representation of life in Poland before the great catastrophe of World War II, a life of flowering literary activity, secular political journalism, successful political struggle, immersion in modern politics, fights for worker rights and benefits, a strong social-democratic labor movement, creation of a secular school system in Yiddish, and a youth movement that later provided the heroic fighters for the courageous Warsaw Ghetto Uprising.

Bernard Goldstein dedicated his life to the Jewish labor movement in Poland. An ordinary worker, he rose to a position of prominence in the Jewish Labor Bund, the premier political representative of the Jewish working class in pre-WW II Poland. His life and work were intimately entwined with the Bund. He was its chief trade union organizer in Warsaw, and its militia organizer and commander. He wrote two books, this one and The Stars Bear Witness.Marvin S. Zuckerman has edited several volumes of Yiddish literature in English translation, has written college English textbooks, and has published articles in various periodicals, some in Yiddish and some in English. A retired professor of English, he served as chair of the English Department for fifteen years at Los Angeles Valley College and as dean of Instruction for six years, before retiring in 2002. He is the son of Yiddish-speaking Bundists from Warsaw, Poland.