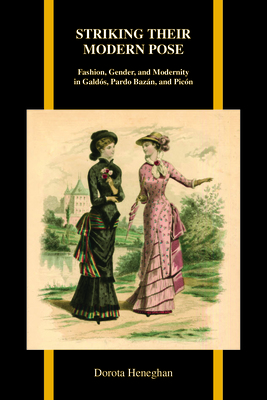 Fashion, Gender, and Modernity in Galdós, Pardo Bazán, and Picón

The importance of fashion in the construction and representation of gender and the formation of modern society in nineteenth-century Spanish narrative is the focus of Dorota Heneghan's Striking Their Modern Pose. The study moves beyond traditional interpretations that equate female passion for finery with symptoms of social ambition and the decline of the Spanish nation, and brings to light the manners in which nineteenth-century Spanish novelists drew attention to the connection between the complexities of fashionable female protagonists and the shifting limits of conventional womanhood to address the need to reformulate customary ideals of gender as a necessary condition for Spain to advance in the process of modernization. The project also sheds light on an area largely unexplored by previous studies: men's pursuit of fashion. Through the analysis of the richness of sartorial subtleties in Benito Pérez Galdós's and Emilia Pardo Bazán's portraits of their male characters, this book brings forward these writers' exposure of the much-denied bourgeois men's love for self-adornment and the incoherencies and contradictions in the allegedly monolithic, stable concept of nineteenth-century Spanish masculinity. While highlighting the ways in which the art of dressing smartly provided nineteenth-century Spanish novelists with effective means to voice their critique of conventional gender order, the book also lends insight into these authors' methods of manipulating sartorial signs to explore and to envision (as in the case of Pardo Bazán and Jacinto Octavio Picón) alternative models of masculinity and femininity. Threading through all chapters of the study is the idea propagated by all three of these writers that Spain's full integration into modernity required not only the redefinition of the feminine role, but the reconfiguration of the masculine one as well.

Dorota Heneghan is an assistant professor of Spanish at Louisiana State University. She received her PhD in Spanish from Yale University and specializes in nineteenth-and twentieth-century Spanish peninsular literature and culture, gender studies, and comparative literature. She has published articles in Anales Galdosianos, Hispanic Review, and Bulletin of Hispanic Studies. Her current research focuses on gender relations and nation in the works of Sofía Casanova.