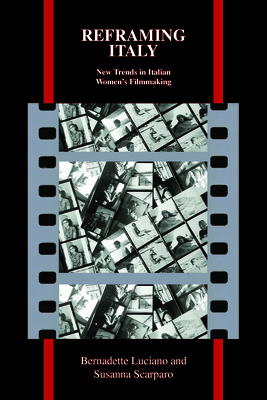 In recent years, Italian cinema has experienced a quiet revolution: the proliferation of films by women. But their thought-provoking work has not yet received the attention it deserves. Reframing Italy fills this gap. The book introduces readers to films and documentaries by recognized women directors such as Cristina Comencini, Wilma Labate, Alina Marazzi, Antonietta De Lillo, Marina Spada, and Francesca Comencini, as well as to filmmakers whose work has so far been undeservedly ignored. Through a thematically based analysis supported by case studies, Luciano and Scarparo argue that Italian women filmmakers, while not overtly feminist, are producing work that increasingly foregrounds female subjectivity from a variety of social, political, and cultural positions. This book, with its accompanying video interviews, explores the filmmakers' challenging relationship with a highly patriarchal cinema industry. The incisive readings of individual films demonstrate how women's rich cinematic production reframes the aesthetic of their cinematic fathers, re-positions relationships between mothers and daughters, functions as a space for remembering women's (hi)stories, and highlights pressing social issues such as immigration and workplace discrimination. This original and timely study makes an invaluable contribution to film studies and to the study of gender and culture in the early twenty-first century.