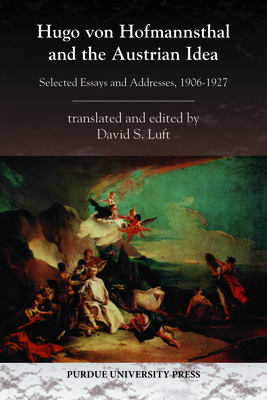 The Austrian writer Hugo von Hofmannsthal (1874-1929) was one of the great modernists in the German language, but his importance as a major intellectual of the early twentieth century has not received adequate attention in the English-speaking world. One distinguished literary scholar of his generation called Hofmannsthal a "spiritual-moral authority" of a kind German culture had only rarely produced. This volume provides translations of essays that deal with the Austrian idea and with the distinctive position of German-speaking Austrians between German nationalism and peoples to the East, whether in the Habsburg Monarchy or beyond it, as well as essays that locate Hofmannsthal's thinking about Austria in relation to the broader situation of German and European culture. "It is the true accomplishment of this translation that Hofmannsthal's language, recreated in a clear and elegant English, regains its melody of an earlier time. If there ever was a captivating documentation of the European potential of Austria beyond the stereotypes of "Vienna at 1900," it has been brought together in this volume of essays that responded to the tragic challenges of World War I in a constructive way." Frank Trommler, University of Pennsylvania