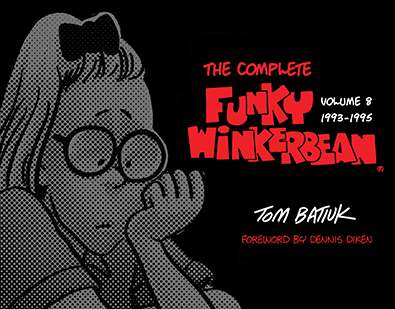 In this eighth volume, Funky Winkerbean continues to move forward in real time, tackling issues of relevance and substance with characters whose lives are increasingly fateful and destined. Funky has placed Batiuk at the forefront of a new genre in comic art history as the strip pursues stories ahead of their time: guns in schools and teen suicide. The humor in Funky continues to grow as it evolves from sitcom gags to a deeper and more engaging behavioral style of humor.

Tom Batiuk is a graduate of Kent State University. His Funky Winkerbean and Crankshaft comic strips are carried in hundreds of newspapers throughout the United States. He was recognized as one of three finalists in the editorial cartooning category of the 2008 Pulitzer Prize awards competition for the singular series of daily comic strips that chronicled the death of longtime character Lisa Moore, which were collected in Lisa’s Legacy Trilogy. His Funky Winkerbean series and Roses in December were finalists for the 2016 Eisner Awards.