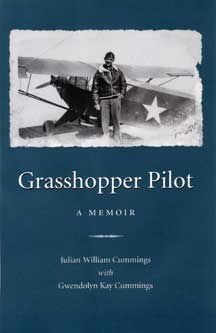 During World War II the ability of American ground forces to advance in the face of fierce resistance was largely dependent on the precision of artillery barrages. Aerial observation was frequently the only effective means to locate enemy targets. For this mission the Army air corps used prewar light civilian airplanes (usually reconfigured Piper Cubs) known as Grasshoppers for their ability to take off from and land in tight places like dirt roads, grass fields, and ships. In addition to pinpointing enemy artillery, these aircraft were often assigned other missions—medical evacuations, reporting on enemy troop movements, and reconnaissance—often armed only with handguns.

Julian W. Cummings began flying lightweight Piper Cubs as a young man and was recruited for the experimental and high-risk aerial reconnaissance unit of the U.S. Army’s Third Infantry Division. In this memoir he chronicles his daring missions from first flights in the North African campaign through the end of the war. He flew 485 missions in both theaters, and for his extraordinary bravery in Sicily he was awarded the Distinguished Service Cross.

Grasshopper Pilot gives long-overdue attention and credit to the crucial role these courageous men played in combat and adds valuable information to an understudied dimension of the war.

The late Julian William “Bill” Cummings owned and operated an ornamental iron business. Gwendolyn K. Cummings worked closely with Bill in preparing this memoir before his death in 2002. She has written and illustrated several children’s books.