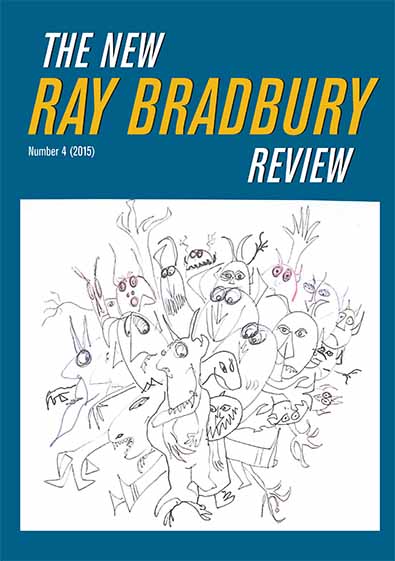 Creative fragments set aside for a day that never came

Each previous The New Ray Bradbury Review, prepared and edited by the Center for Ray Bradbury Studies, examines the impact of Bradbury’s writings on American culture and his legacy as one of the master storytellers of his time. The late Ray Bradbury’s metaphor-rich imagination led to a prolific and highly influential career spanning seven decades, but it also left a decades-long field of deferred fragmentary fictions and story ideas that would remain unfulfilled creations. For Number 4, William F. Touponce, founding editor emeritus of the Review, has gathered and introduced fascinating examples of story ideas, brief story openings and endings, and extended story openings that will forever remain dreams deferred.

The fragments presented in this issue illustrate Bradbury’s progressive stages of creativity during story composition, and to that end some of the physical elements of presentation are preserved in layout. The selections are followed by a list of recent discoveries that supplement the comprehensive checklist of known fragments included in previous editions of the Review. Number 4 concludes with Jonathan Eller’s “Fragmentary Futures,” a survey of Bradbury’s surviving preliminary outlines and projected timetables for future books—tenuous documents that convey a sense of the instability lurking beneath Bradbury’s solid and enduring achievements as a masterful teller of tales.

Number 4 of the Review completes the all-archival presentation begun with Number 3, which focused on the thematic range of the surviving fragments. The story openings presented in Number 4 reveal the hidden tension between Bradbury’s subconscious inspirations and the stifling effects of his own self-conscious thoughts—the more logical thought patterns that he desperately tried to hold at bay during the few hours it would take him to complete an initial draft. Time and again, rational thought extinguished the initial subconscious upwelling of character and scene, causing him to set these fragments aside for a day that never came.

The New Ray Bradbury Review and the multivolume Collected Stories of Ray Bradbury are the primary publications of the Center for Ray Bradbury Studies, the major archive of Bradbury’s writings located at Indiana University–Purdue University, Indianapolis (IUPUI).