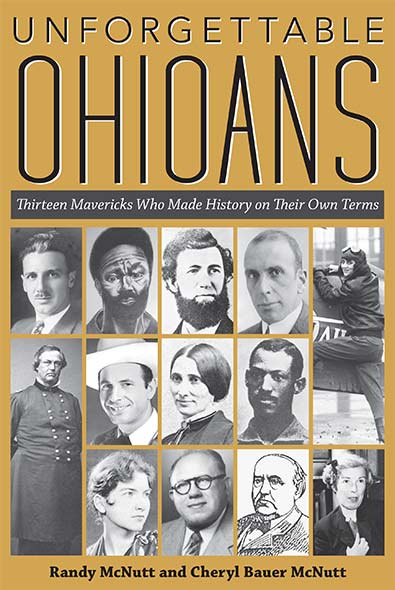 Thirteen Mavericks Who Made History on Their Own Terms

Famous Buckeyes are recognized by practically everyone. They range from presidents and inventors to aviators and astronauts. But other important Ohioans have been unfairly forgotten over the years. To find them, the authors of Unforgettable Ohioans dug beneath the layer of well-known names to discover a cache of remarkable individuals whose lives had significant national or international impact. They won’t show up on the top-ten list of most famous Ohioans, but their stories are nonetheless intriguing and important.

Randy and Cheryl Bauer McNutt introduce us to David Harpster, who became “the Wool King of America,” as the newspapers of his day called him, and drove a significant segment of the nation’s economy; Lucy Webb Hayes, the future First Lady who sacrificed her comfort and safety—even the safety of one of her children—to become a “mother” to hundreds of injured Union soldiers during the Civil War; Zachary Lansdowne, the Greenville naval officer who became an expert on lighter-than-air craft and commanded the airship USS Shenandoah when it crashed in Ohio in 1924; Benjamin Hanby, the Westerville songwriter whose hit songs comforted both Rebel and Yankee soldiers—and still entertain us each Christmas season; Lloyd “Cowboy” Copas, the smooth singer from Blue Creek who helped establish modern country music and later died in the same airplane crash that claimed the life of Patsy Cline; and Moses Fleetwood Walker, the Steubenville baseball player who came out of Oberlin College to become the first black player in the major leagues—in 1884. The lives and achievements of these and other extraordinary Ohioans are featured in this fascinating and entertaining book.

Randy McNutt, the author of twenty-two books, is a former writer for The Cincinnati Enquirer and Ohio Magazine. He has published two other books with the Kent State University Press, Lost Ohio: More Travels into Haunted Landscapes, Ghost Towns, and Forgotten Lives (2006) and Finding Utopia: Another Journey into Lost Ohio (2012). A cultural historian, McNutt has also written extensively on American roots music.

His wife, Cheryl Bauer McNutt, is a former teacher and newspaper writer and the author of ten books, including Wisdom’s Paradise: The Forgotten Shakers of Union Village, which she cowrote with Ohio senator Rob Portman. The McNutts live in Hamilton, Ohio.