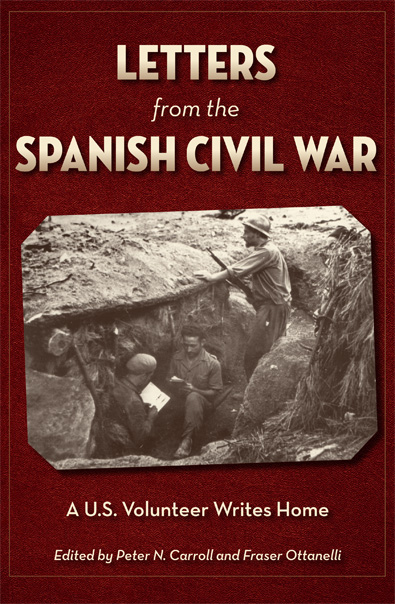 Letters from the Spanish Civil War

Letters from the Spanish Civil War provides a unique perspective into the motivations that led a young man from the American heartland to defy U.S. neutrality and travel to Spain to fight in defense of democracy against Nazi- and Fascist-backed aggression. Born in a small town in rural Ohio, Carl Geiser came from a deeply religious German-speaking family that had recently emigrated from Switzerland. The onset of the Great Depression exposed Geiser to the reality of hard times and discrimination, challenging his belief that hard work would bring self-reliance and just rewards. This awakening led him to question the logic and values of capitalism and to become active in a range of youth and student organizations linked to the Communist Party.

Following the 1936 military uprising that was supported by Hitler and Mussolini against Spain’s legally elected Republican government, Geiser decided that more needed to be done than simply delivering speeches and raising money to fight fascism. Joining with over 35,000 volunteers from fifty countries to cross the Pyrenees and help defend the beleaguered and isolated government, Geiser acted on his personal political ideology, which was based on American small-town communal values and internationalist ideals of class-based solidarity.

In Letters from the Spanish Civil War, possibly the largest surviving collection of letters written by a U.S. volunteer during this conflict, Geiser eloquently describes to family and friends the deep personal motivations that led him to risk his life to defend democracy in a faraway country. His detailed descriptions of the daily reality of warfare in one of the first battlefields of World War II sought to inspire those back home to awaken the U.S. public opinion and policy makers to the global threat of Fascist expansionism.

Fraser Ottanelli is Professor and Chair of the Department of History at the University of South Florida in Tampa. His areas of specialization are ethnic and labor history, comparative migration, and U.S. history in a global age. On these topics he has authored two books and numerous articles and essays. Currently he serves on the Executive Committee of the Abraham Lincoln Brigade Archives (ALBA) and is on the research team of the Asaba Memorial Project—an effort to document and memorialize a mass killing of civilians that took place in 1967, during the Nigerian Civil War.