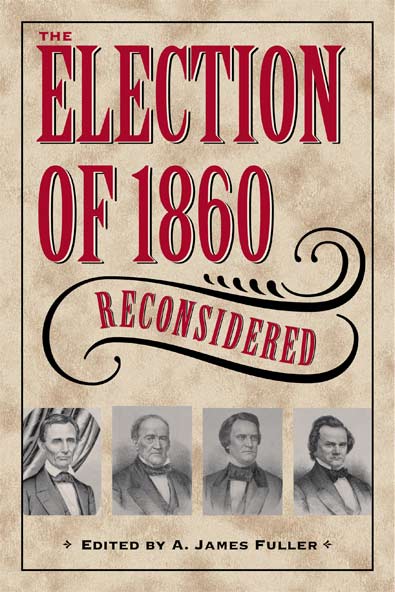 The Election of 1860 Reconsidered

The election of 1860 was a crossroad in American history. Faced with four major candidates, voters in the North and South went to the polls not knowing that the result of the election would culminate in the bloodiest conflict the United States had ever seen. Despite its obvious importance, surprisingly few studies have focused exclusively on this electoral contest itself. In The Election of 1860 Reconsidered, seven historians offer insightful essays that challenge the traditional view of the election, present fresh inter- pretations, and approach the contest from new angles.

In engaging treatments of the main presidential candidates, the authors employ biography to explain the election. Michael S. Green deftly analyzes Abraham Lincoln and effectively overturns the view of the Republican as a passive candidate. James L. Huston provides an innovative reconsideration of Stephen A. Douglas in defeat with an insightful look at the Little Giant’s campaign tours of the South. Using the lens of honor, A. James Fuller scrutinizes John C. Breckinridge in an enlightening study of the Southern Democratic candidate’s campaign. In another groundbreaking essay, Fuller reconsiders Constitutional Unionist John Bell as a Whig who stood for the Republican principle of compro- mise. The biographical theme continues in John R. McKivigan’s splendid examination of Frederick Douglass as he carefully guides the reader through the changing attitudes and ambivalence of the abolitionist perspective.

As Douglas G. Gardner demonstrates in his fine exposition of the historiographical themes involved with the election, The Election of 1860 Reconsidered includes interdisciplinary concerns and new lines of inquiry. Addressing matters of interest to political scientists as well as historians, Thomas E. Rodgers takes up the issue of voter turnout in a sophisticated analysis that emphasizes ideology. Political culture and context allow A. James Fuller to make revealing interdisciplinary connections while using the state of Indiana as a case study to test and refute realignment theory. Turning to observations from across the Atlantic, Lawrence Sondhaus offers a new approach to the election in his penetrating study of how Europeans viewed and misunderstood the U.S. presidential race.

This remarkable collection breathes new life into political history and will serve as a primer for a generation of scholars interested in understanding the most important election in American history.

A. James Fuller is associate professor of history at the University of Indianapolis. Among his many publications are Chaplain to the Confederacy: Basil Manly and Baptist Life in the Old South, 1798- 1868; America, War and Power: Defining the State, 1775-2005 (coedited with Lawrence Sondhaus); and Soldiers of Christ: Selections from the Writings of Basil Manly, Sr., and Basil Manly, Jr. (coedited with Michael Haykin and Roger Duke).