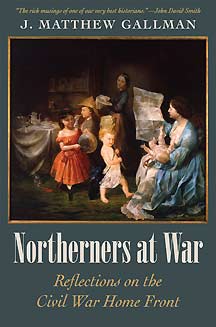 “The essays in this collection are snapshots about particular questions, bodies of evidence, and theoretical issues. Taken together these essays map out a portion of my own professional evolution, from the questions that absorbed my attention when I was first thinking about the Civil War home front, to the issues that have seemed most interesting to me in the last several years.”—from the Introduction

Northerners at War brings together noted historian J. Matthew Gallman’s most significant essays on the economic, social, and domestic aspects of life in the North during the Civil War. Gallman tackles a range of Civil War home front topics—from urban violence and Gettysburg’s wartime history to entrepreneurial endeavors and the war’s economic impact. He also examines gender issues, with a fascinating review of the career of orator Anna E. Dickinson and an insightful examination of how northerners used gendered notions of masculinity in rhetoric to recruit African American soldiers.

A noteworthy contribution to our understanding of the home front, Northerners at War is indispensible to those interested in the Civil War era.

J. Matthew Gallman has been writing about the Civil War for more than twenty years. His books include Mastering Wartime: A Social History of Philadelphia during the Civil War, The North Fights the Civil War, and America’s Joan of Arc: The Life of Elizabeth Dickinson. Gallman is professor of history at the University of Florida.