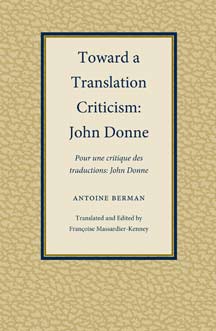 Toward A Translation Criticism

Françoise Massardier-Kenney’s translation of Antoine Berman’s Toward a Translation Criticism makes available for the first time in the English-speaking world one of the twentieth-century’s foundational texts in translation studies. Berman’s book, published posthumously in France, develops an original concept of “criticism of translation” and a methodology to anchor the practice of this criticism. He demonstrates how the work of translation is a critical process as well as a creative one. Moving away from nonsystematic evaluative approaches that focus on the shortcomings of translations or the normative approaches that study the cultural and literary systems into which the translations are inserted, Berman applies the notion of ethics he developed in his earlier works, calling for a translation that is nonethnocentric and stipulating that the creativity required by translation be focused on the re-creation of the original in the other language without being over-determined by the personal poetics of the writer-translator. Berman achieves a rare combination of hermeneutic and stylistic analysis, of commentary on the original and analysis of its translations, giving the reader access both “to the language of the original—to the way in which poetry and thought are deployed—and to the actual work of translation.”

Toward a Translation Criticism is divided into two separate but interlinked parts, each focused on one element of the ethics of translation: theory (reflection) and practice (experience). In the first part Berman presents what he calls a general “productive criticism,” while in the second part he applies the general theoretical principles of this criticism to the analysis of the translations of John Donne’s work into French and Spanish. The translation of Berman’s text is accompanied by an introduction placing Berman’s thought in its intellectual context and by supplementary notes that complete the bibliographic material presented in the French-language version. This study is essential reading for translation studies scholars, readers interested in the creative literary process, in the nature of literary criticism, andin the philosophy of language. It will also be of interest to John Donne specialists.

Antoine Berman (1942–91) was a French translator, historian, and theorist of translation. Françoise Massardier-Kenney is professor of French and Director of the Institute for Applied Linguistics at Kent State University. She is the editor of the American Translators Association Scholarly Series and coeditor of the journal George Sand Studies. Her publications include the monograph Gender in the Fiction of George Sand (2001), the translation of Sand’s Valvèdre (2007), and Translating Slavery, Volumes 1 and 2, both of which she coedited with Doris Y. Kadish.