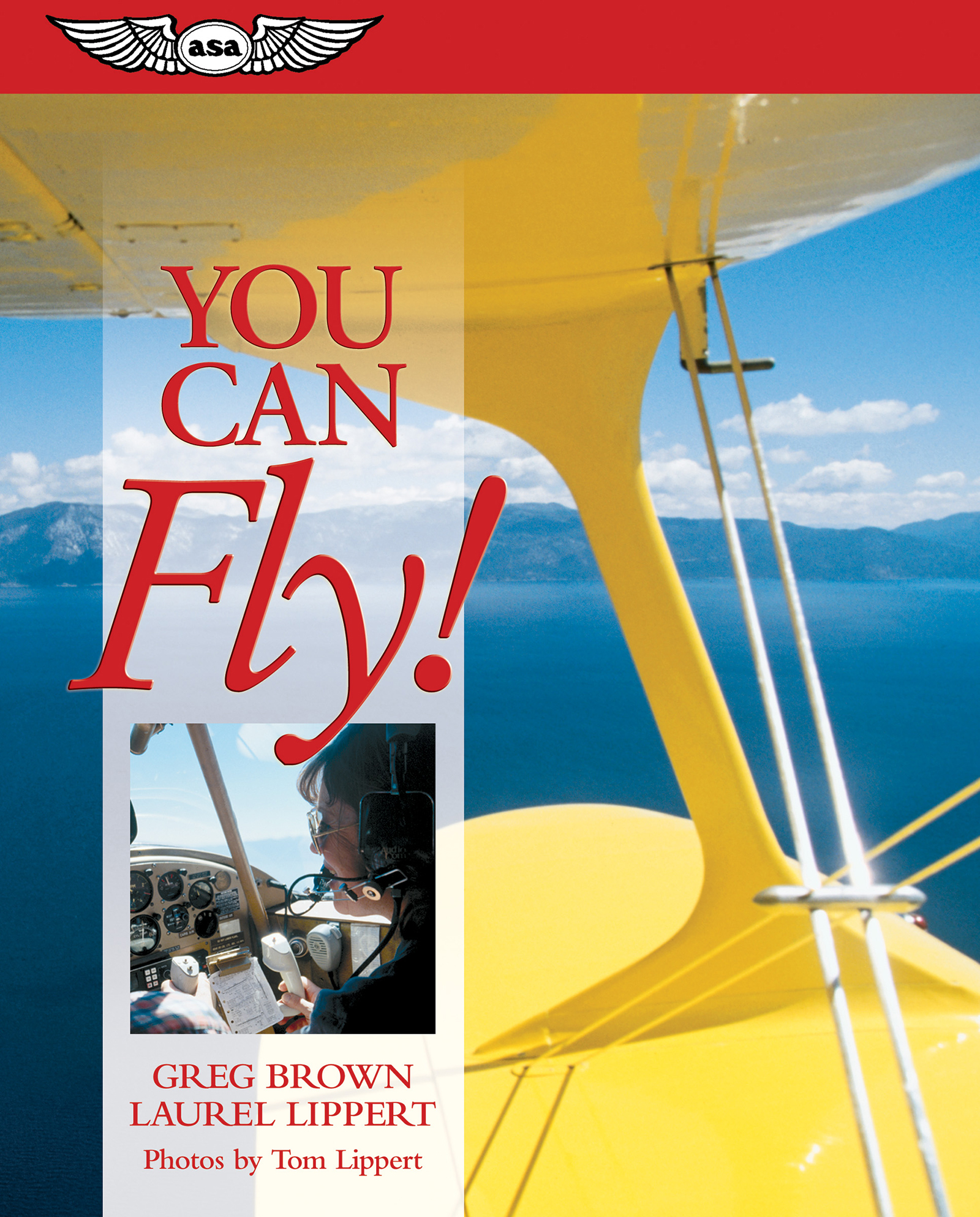 For those who have always dreamed about flying but didn't know where or how to start — now they can take that long-awaited first step with some guidance. You Can Fly! authors Greg Brown and Laurel Lippert write to those who are considering flight training, specifically to answer frequently asked questions about it, and at the same time entice more people into exploring general aviation.

The authors in a welcoming way, along with gorgeous photographs by Tom Lippert, reveal to the non-flying public the romance and adventures found in flying by centering their focus on the many joys and benefits of flight, and leaving out the dull "FAA verbiage" found in other learn-to-fly books. You Can Fly! has detailed sidebars throughout the book that will intrigue aspiring pilots with questions like, "What should I expect on my first flight?" and "How do you read an altimeter?" All of these questions are explained with brevity, complemented by easy-to-grasp and colorful illustrations. With illustrations from front to back, and beautiful photographs worthy of an expensive coffee-table book throughout, You Can Fly! is the perfect addition to a flight school library, FBO, or aviation enthusiast's collection. This is truly a one-of-a-kind, fun, exciting and informative book on flying for prospective pilots.

Greg Brown: In Greg Brown's book "The Savvy Flight Instructor" the author's love for flying is obvious in every chapter, as is his concern for the image of the flight instructor and flight school: that they perform the best they can to seek out, promote, and sustain the joy of flight for the good of the entire industry. In keeping with his role as general aviation advocate, Greg hosts the "Aviation Careers Forum" and the "New Pilots Forum" on America Online, and serves as a Contributing Editor for Flight Training magazine. He has entertained and educated aviation audiences as a speaker since 1990, most recently as presenter for NATA's acclaimed Flight School Training Manager Seminars.

An active practitioner of the noble art of flight instructing since 1979, Greg has also served as a professional pilot in both scheduled and corporate aviation, and flown extensively for pleasure and personal business. His teaching background also includes service as faculty member at Purdue University, regular presentations at Embry-Riddle Aeronautical University, and numerous professional seminars.

Greg Brown earned Bachelor's and Master's degrees at the University of Illinois at Urbana-Champaign, where his graduate work included human-factors cockpit design at the Aviation Research Laboratory. He studied for two years at the University of Wisconsin-Madison, and completed several advanced flight ratings at Purdue University. He holds an ATP pilot certificate with Boeing 737 type rating, and Flight Instructor certificate with all fixed wing aircraft ratings including glider. Greg also holds Advanced and Instrument Ground Instructor ratings, and has been active as a pilot since 1971. He was also honored with the "2000 Industry/FAA National Flight Instructor of the Year" award.

Greg's most recent publication is Flying Carpet: The Soul of an Airplane which includes stories from his long-running column in Flight Training magazine. Other popular aviation books by Greg include: The Turbine Pilot's Flight Manual, and Job Hunting for Pilots.

Laurel Lippert : Laurel Lippert began flying at age 40. With "the speed of a Piper Cub," she earned her instrument and multi-engine ratings, and her commercial and flight instructor certificates. Her writing career existed before she fell in love with flying. Laurel wrote feature articles for SKI and Snow Country magazines, and video scripts for medical and technical companies. In 1996, she wrote her first aviation article on her home airport of Truckee, California, for Mountain Pilot magazine. Since then, she contributed to Plane & Pilot, Pilot Getaways magazine, and to ipilot.com as an online columnist.

With co-author Greg Brown, Laurel wrote "You Can Fly!," a colorful and inspiring guidebook to understanding and appreciating the process of learning to fly. Since the book's debut, Laurel has spoken at EAA's AirVenture in Oshkosh, a talk she calls "You're How Old? Learning to Fly After 40."