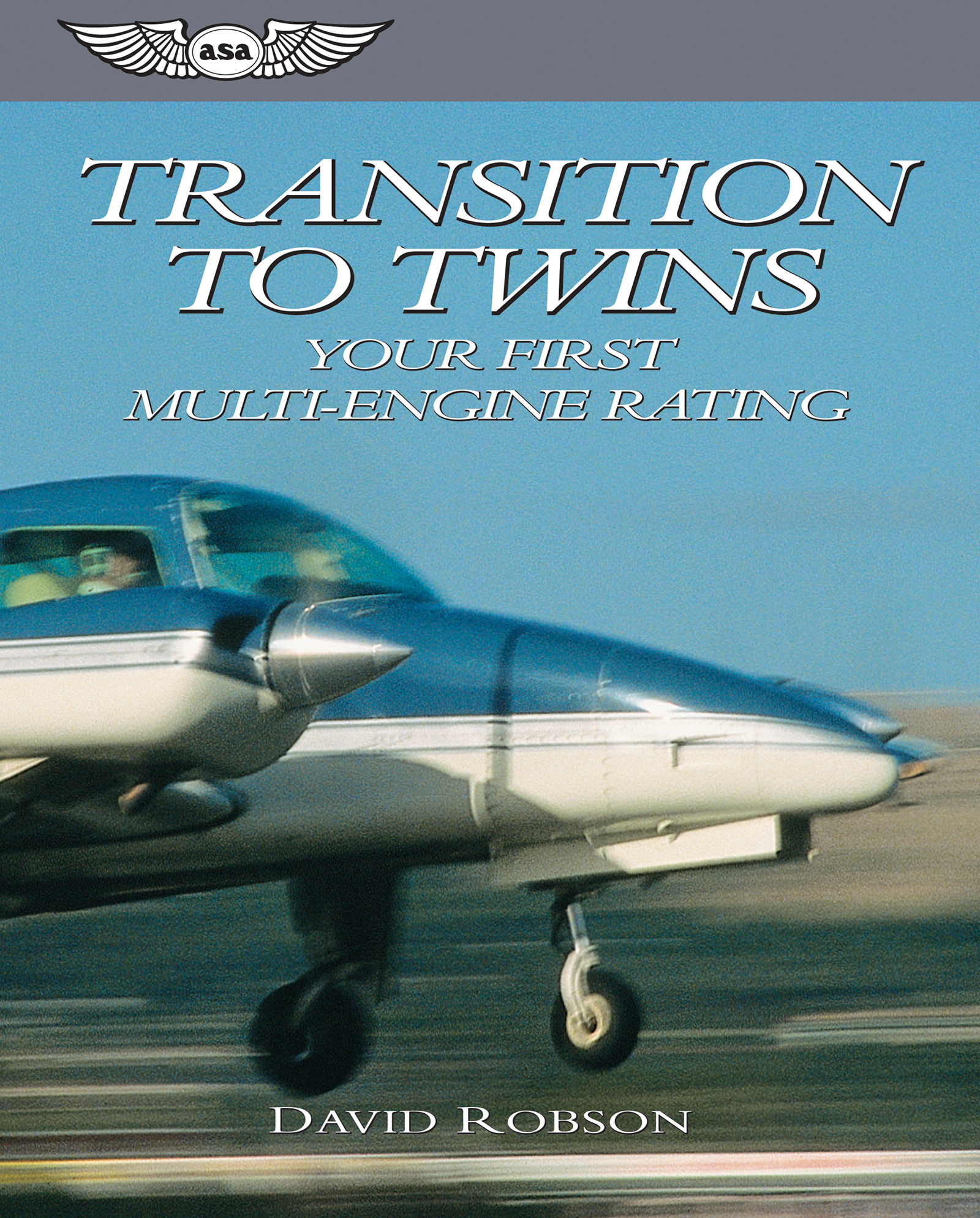 There is a wealth of flight training information that relies on word of mouth for distribution. Some pilots are lucky enough to rub shoulders with someone who had the wisdom of experience and the desire to pass it on. David Robson’s book effectively broadens the distribution by sharing his wealth of multi-engine flying know-how in a new manual for pilots and flight instructors.

Transition to Twins provides information and advice to pilots undergoing their first Multi-Engine Rating, and is one of the most concise and well-illustrated books on flying twin-engine airplanes.

This manual covers all facets of multi-engine flight:

Chapters 1–9 discuss all areas of twin operation including system descriptions, aerodynamics, normal and abnormal operations, VFR, night, and IFR considerations, flight planning, and weight and balance. A chapter on commercial operations introduces not only the airmanship required, but also how to deal with passengers, crew, cargo, schedules, and duty times.

Then Chapter 10 lays out each step to earning a multi-engine rating, including a syllabus with both ground and flight training lessons. The book concludes with questions to prepare pilots for a multi-engine checkride, to check-out in a new multi-engine airplane, or for an insurance competency exam for any twin airplane.

Transition to Twins will prove an invaluable manual to student and instructor alike.

David Robson is a career aviator having been nurtured on balsa wood, dope (the legal kind) and tissue paper. He made his first solo flight shortly after his seventeenth birthday, having made his first parachute jump just after his sixteenth. His first job was as a junior draftsman (they weren't persons in those days) at the Commonwealth Aircraft Corporation in Melbourne, Australia. At that time he was also learning to fly de Havilland Chipmunks with the Royal Victorial Aero Club.

He joined the Royal Australian Air Force in 1965 and served for twenty-one years as a fighter pilot and test pilot. He flew over 1,000 hours on Mirages and 500 on Sabres (F-86). He completed the Empire Test Pilots’ course in England in 1972, flying everything from gliders to Lightning fighters and Argosy transport aircraft. He completed a tour in Vietnam as a forward air controller flying the USAF O-2A (Oscar Deuce). In 1972 he was a member of the Mirage formation aerobatic team, the Deltas, which celebrated the RAAF’s 50th anniversary.

After retiring from the Air Force he became a civilian instructor and lecturer and spent over ten years with the Australian Aviation College, a specialized international school for airline cadet pilots. During 1986-88 he was the editor of the national safety magazine, the Aviation Safety Digest, which won the Flight Safety Foundation's international award. He was recently awarded the Australian Safety Foundation’s Certificate for Air Safety.

David holds an ATP license and instructor’s rating. His particular ambition is to see the standard of flight and ground instruction improved and for aviation instruction to be recognized as a career and be adequately rewarded.