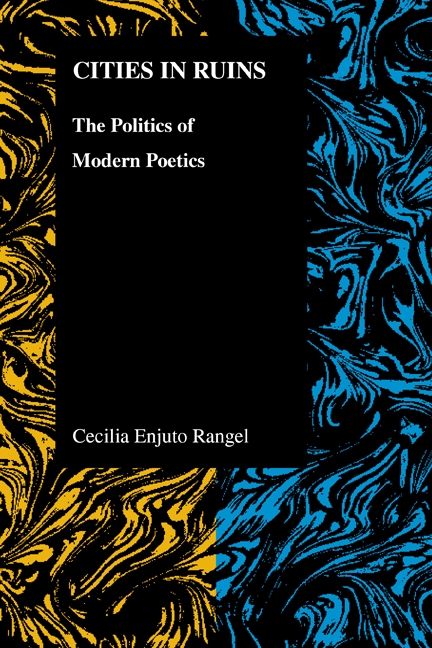 The Politics of Modern Poetics

The attacks in New York on September 11, 2001, and in Madrid on March 11, 2004, provoked diverse political reactions, but the imminence of the ruins triggered a collective historical awakening. In Cities in Ruins, Cecilia Enjuto Rangel argues that the portrayal in poetry of the modern city as a disintegrated, ruined space is part of a critique of the visions of progress and the historical process of modernization that developed during the nineteenth century and the first half of the twentieth century. Enjuto Rangel's study investigates the virtually unexplored map of modern ruins in modern poetry. She interprets modern poetry on ruins as a critique of both capitalist definitions of progress and the devastating effects of modern warfare. Furthermore, she argues that the representation of ruins provokes a

Cecilia Enjuto Rangel, University of Oregon, received her Ph.D. in comparative literature from Yale University. Her publications focus on transatlantic poetics and film. She is currently working on an edition of a historical testimony from the Spanish Civil War.