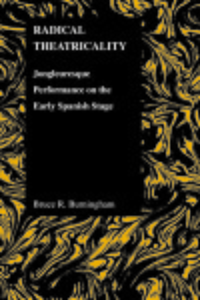 Radical Theatricality argues that our narrow search for extant medieval play scripts depends entirely on a definition of theater far more literary than performative. This literary definition pushes aside some of our best evidence of Spain's medieval performance traditions precisely because this evidence is considered either intangible or

Bruce R. Burningham teaches Spanish and Comparative Literature at Illinois State University, where he specializes in medieval and early modern Spanish literature, Hispanic drama, and performance theory. He is a recipient of an Andrew W. Mellon Postdoctoral Fellowship and a National Endowment for the Humanities Summer Stipend.