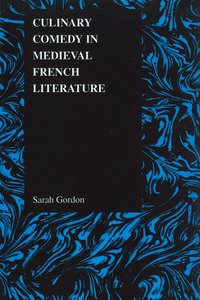 Culinary Comedy in Medieval French Literature focuses on the intersection of food and humor across several medieval narrative genres. This book is a part of the Purdue Studies in Romance Literature Series.

Professor Sarah Gordon holds a Ph.D. in French Language & Literature from Washington University and an M.Phil. in European Literature from Oxford. A medievalist, her research focuses on Medieval French verse narrative and lyric poetry and the topics of comedy, humor, imitation, and translation. She has been awarded fellowships from NEH, Mellon, MLA, and others. She has taught at Ohio University, L'UniversitÃ© de Paris Sorbonne/ Sorbonne-Nouvelle, Washington University, and elsewhere. She also brings her experiences living in France and the islands of Francophone New Caledonia to the classroom. Her employment experiences in France included working for L'Express/Le Point/EatinParis.com, Xerox, Peugeot, and Langues & Enterprises, writing restaurant reviews in Paris, as well as teaching business language courses at the Sorbonne-Nouvelle. She also enjoys teaching Business French at Utah State University.