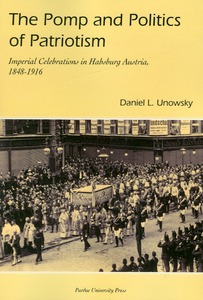 Pomp and Politics of Patriotism

This book examines the promotion and reception of the image of Franz Joseph (Habsburg emperor from 1848 to 1916) as a symbol of common identity in the Austrian half of the Habsburg Monarchy (Cisleithania). In the second half of the nineteenth century and the first decades of the twentieth century the promotion of the cult of the emperor encouraged a Cisleithania-wide culture of imperial celebration. On Franz Joseph's birthdays and jubilees, cities produced special theater productions, torchlight parades, and ethnic/historical processions. Thousands of voluntary associations sponsored local festivities. Hundreds of thousands of villagers and townspeople set transparent portraits of Franz Joseph in illuminated windows. Publishers sold millions of commemorative books and pamphlets, and retailers offered busts, plaques, and mass-produced portraits of the emperor. The ability of the center to control the meaning of Habsburg patriotism was limited, however. This study concentrates on the official presentation of the imperial cult as well as on the use or rejection of the image of the emperor by regional social and nationalist factions. It analyzes both the production of the cult of the emperor and its reception, illuminating the tension between national and supra-national identity in an age of expanding political participation.

Daniel L. Unowsky is Associate Professor of Central and Eastern European history at the University of Memphis.