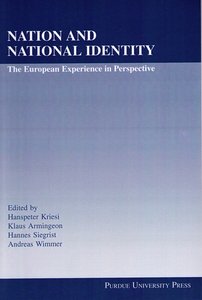 The European Experience in Perspective

The contributions to this volume are divided into three parts, each introduced by one of the editors, plus a general introduction which discusses the peculiarities of the Swiss case of state formation and nation building. The five chapters of Part I provide an idea of the variety of approaches and perspectives which currently exist in the study of nationhood and national identity. The authors of these contributions clarify basic concepts; show the deep and intractable ambiguity of classic distinctions; and point to new forces within nation-states which have seriously weakened their internal cohesion. All of these considerations give rise to new challenges for nationalist representations of the world and established institutions of social integration. Under present conditions, national identity and political solidarity have to compete with other, crosscutting ways of creating boundaries: ethnic and cultural fragmentation, gender and sexual divides, or divisions in the labor market.
In Part II, the recent experiences of a selected number of countries – Belgium, Austria, Germany, Croatia, and Israel – are presented to illustrate the great diversity of current challenges to national identities. Processes such as globalization and European integration have had an impact on all of them, but mobilization by regional move­ments, reunification of separate territorial parts, the differentiation of formerly homogeneous ethnic identities, the sequels of war, and the country-specific historical legacies, interact with these global processes to constitute many different challenges for national identities and nationhood. Finally, the two contributions in Part III show that the process of European integration gives rise to different images and fulfills different functions for the various nations involved, but it has not yet been able to shape a new European identity.