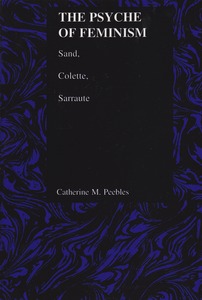 The Psyche of Feminism

The Psyche of Feminism argues that a feminist ethic, in order to be both feminist and ethical, needs to embrace psychoanalysis. After reviewing the relation between feminism and psychoanalysis and arguing for the centrality of psychoanalysis to feminist thought, the study offers an analysis of two attempts by George Sand to reimagine the sexual relationship (Letters to Marcie, Lelia), where the emphasis is on political injustice and the impossibility of women's desires. Moving from rights and desires to the question of pleasures, Peebles then takes up a relatively little-read work by Colette, The Pure and the Impure, in which the narrator suggests that pleasure and its corporeal language hold the key to any understanding of masculinity and femininity. We are then led to the risky question of neutrality put forward by Nathalie Sarraute (You Don't Love Yourself), whose work forces a psychoanan­lytic feminism to face the question: what if sexual difference itself is a ruse? Does the notion of a human neutrality condemn us either to a bygone humanism or to psychoanalysis? The final chapter of the work synthesizes these analyses and argues for a fundamental feminist rethinking of the ideal of equality, an ideal that figures significantly – and uneasily – in each of the works this book treats.