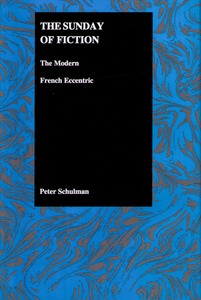 The Sunday of Fiction

In a world of increasing conformity, the modern eccentric can be seen as a contemporary hero and guardian of individualism. This study defines the modern eccentric in twentieth-century French literature and compares the notions of the eccentric in nineteenth and twentieth-century French literature by tracing the eccentric's relationship to time, space, and society. While previous studies have focused on the notion of eccentricity in purely formal terms, The Sunday of Fiction delineates the eccentric as a fully fictional character. This work also completes prior criticism by exploring twentieth-century fictional eccentrics in works by authors such as Raymond Queneau, Jean-Echenoz, Jean-Philippe Toussaint, and Georges Perec, and by filmmakers such as Jacques Tati and Pierre Etaix. Notions of eccentricity since the nineteenth century shift from rather foppish, outlandish representations of aristocratic eccentrics towards a more popular, discreet figure who is uniquely in tune with vanishing spaces of daily life: amusement parks, cafes, grand movie palaces. While the modern world around them is obsessed with speed, technology, and innovation, modern French eccentrics view daily life as a sort of holiday to be savored. In this way, The Sunday of Fiction details the various means modern eccentrics employ to successfully transform the humdrum into the marvelous, or rather Mondays into Sundays.