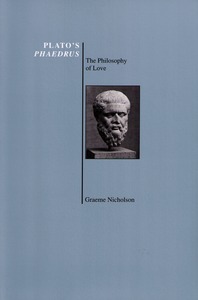 The Philosophy of Love

The Phaedrus lies at the heart of Plato's work, and the topics it discusses are central to his thought. In its treatment of the topics of the soul, the ideas and love, it is closely tied to the other dialogues of Plato's "middle period," the Phaedo, the Symposium, and the Republic. Socrates and Plato have left many marks upon our culture, and the strongest one perhaps is the stature they gave to philosophy by contrasting it with other forms of thought and speech. In the Phaedrus, however, Plato does not feel the need to resist other forms of culture but rather is ready to assimilate them. Graeme Nicholson’s study of the Phaedrus brings out the serious philosophical import of a work that is at once a rhapsody and an argument.

Nicholson offers a new translation of Socrates’ “great speech” on the divine madness of love, revealing it as a polyphony of rhetoric, dialectic, and myth. He also casts new light on many current debates about the status of writing in the Phaedrus and in Plato generally, and the problems of the “unwritten philosophy.” This close reading of the Phaedrus text shows that the Platonic ideas were never abandoned, neither here nor in the later dialogues. Drawing upon many German commentators, as well as English-language ones, Nicholson makes a strong case for a unitary reading of Plato’s early and late philosophy.