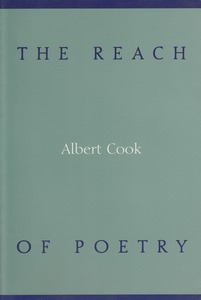 Poets, deeply imbued in the language and conditions of their society, stand forth to produce an utterance that reveals their constant exposure and their resourceful adaptiveness. Albert Cook's wide-ranging study characterizes poetry by testing its reach beyond given points or boundaries of expression. Through an insightful analysis of key poets in various Western traditions, Cook demonstrates that the best poetry rises above these conditions by playing them back against themselves with a freedom whose ineffability is the sign of its ultimate lucidity. Beginning with modern poetry, Cook moves backward in time, aiming at the effect of echoes as much as of cumulations. In each movement forward, the intensities are gathered – by Dante, the troubadours, Catullus, or Alcman. This reach forward is also a reach backward: Alcman's fusions in the seventh century B.C.E. remain permanent within the Western tradition and are accessible in the stream of discourse to modern poets who may never have heard of him. In addition to addressing poems in the short compass of epigram, and ballad, The Reach of Poetry discusses the distinctive achievement of certain lyric poets – among them Wordsworth, Rimbaud, Whitman, Donne, the Shakespeare of the Sonnets, Dante, the troubadours, Catullus, Lucretius, Pindar, and such modern poets as Yeats, Stevens, Rilke, Montale, Follain, Lorca, Char, Celan, and Ashbery.

Albert Cook, Ford Foundation Professor (emeritus) of comparative literature, English, and classics at Brown University, is a poet, critic, playwright, and translator. Among his recent books in criticism and theory are Canons and Wisdoms and Figural Choice in Poetry and Art.