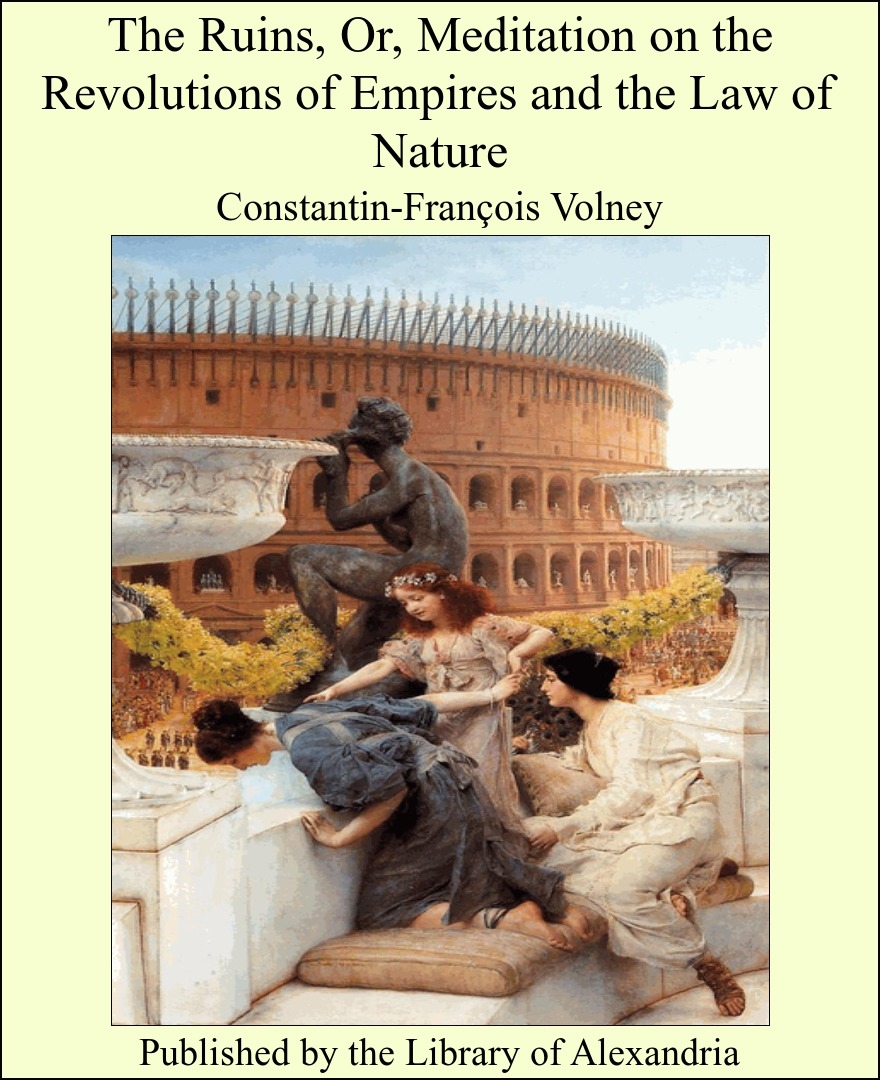 The Ruins, Or, Meditation on the Revolutions of Empires and the Law of Nature

Having recently purchased a set of stereotyped plates of Volney's Ruins, with a view of reprinting the same, I found, on examination, that they were considerably worn by the many editions that had been printed from them and that they greatly needed both repairs and corrections. A careful estimate showed that the amount necessary for this purpose would go far towards reproducing this standard work in modern type and in an improved form. After due reflection this course was at length decided upon, and all the more readily, as by discarding the old plates and resetting the entire work, the publisher was enabled to greatly enhance its value, by inserting the translator's preface as it appeared in the original edition, and also to restore many notes and other valuable material which had been carelessly omitted in the American reprint. An example of an important omission of this kind may be found on the fifteenth, sixteenth, and seventeenth pages of this volume, which may be appropriately referred to, in this connection. It is there stated, in describing the ancient kingdom of Ethiopia, and the ruins of Thebes, her opulent metropolis, that "There a people, now forgotten, discovered, while others were yet barbarians, the elements of the arts and sciences. A race of men, now rejected from society for their sable skin and frizzled hair, founded on the study of the laws of nature, those civil and religious systems which still govern the universe." A voluminous note, in which standard authorities are cited, seems to prove that this statement is substantially correct, and that we are in reality indebted to the ancient Ethiopians, to the fervid imagination of the persecuted and despised negro, for the various religious systems now so highly revered by the different branches of both the Semitic and Aryan races. This fact, which is so frequently referred to in Mr. Volney's writings, may perhaps solve the question as to the origin of all religions, and may even suggest a solution to the secret so long concealed beneath the flat nose, thick lips, and negro features of the Egyptian Sphinx. It may also confirm the statement of Dioderus, that "the Ethiopians conceive themselves as the inventors of divine worship, of festivals, of solemn assemblies, of sacrifices, and of every other religious practice." That an imaginative and superstitious race of black men should have invented and founded, in the dim obscurity of past ages, a system of religious belief that still enthralls the minds and clouds the intellects of the leading representatives of modern theology,—that still clings to the thoughts, and tinges with its potential influence the literature and faith of the civilized and cultured nations of Europe and America, is indeed a strange illustration of the mad caprice of destiny, of the insignificant and apparently trivial causes that oft produce the most grave and momentous results