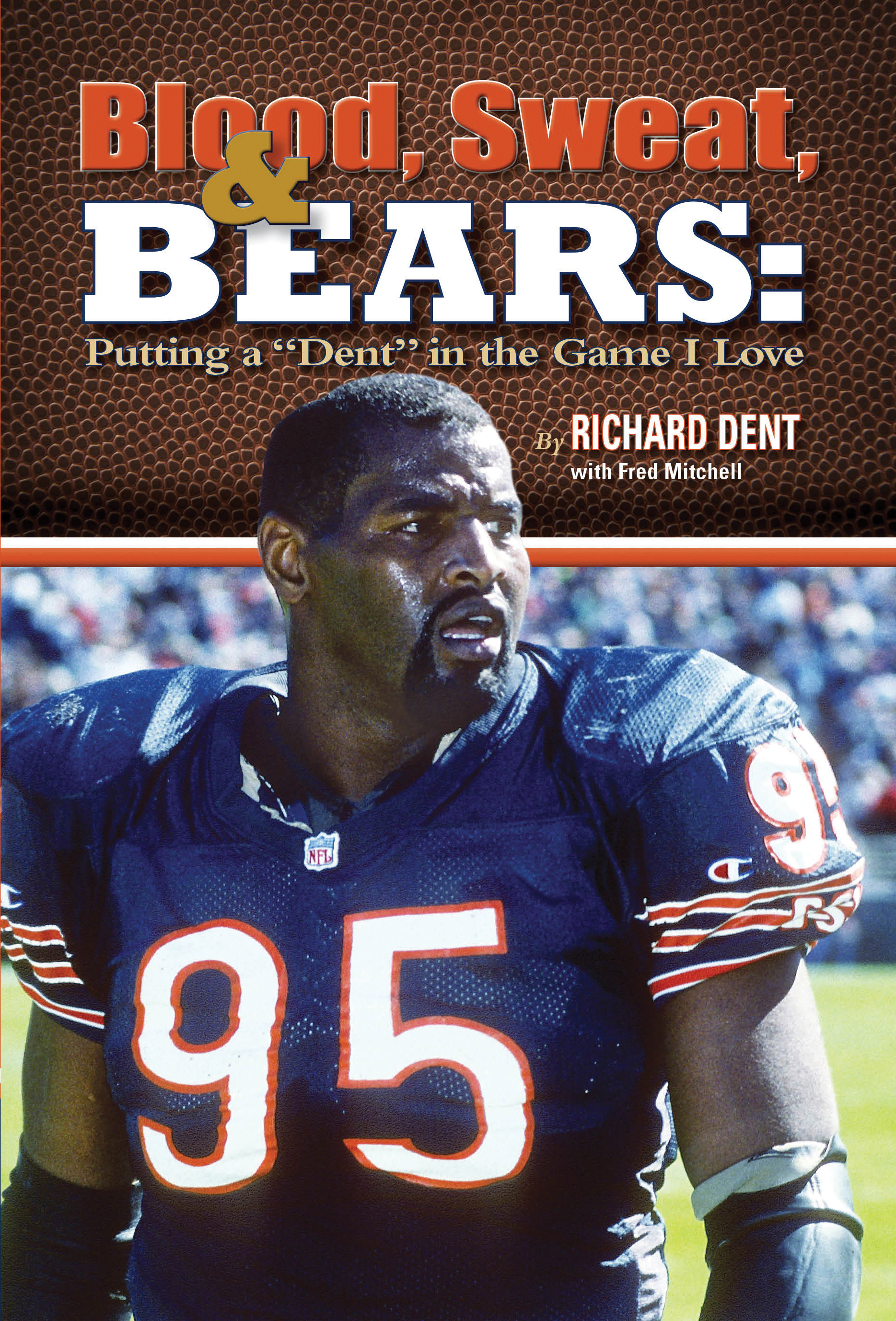 Putting a dent in the Game I love

Richard Dent, a cornerstone of the Bears’ overwhelming defense during their Super Bowl run, and a 2011 inductee into the Pro Football Hall of Fame, was an 8th-round draft pick out of tiny Tennessee State in 1983. The tall and skinny rookie would become a 4-time Pro Bowl selection who also played for the San Francisco 49ers, Indianapolis Colts, and Philadelphia Eagles. Dent wound up his brilliant 15-year career with 137.5 sacks, eight interceptions, 13 fumble recoveries, and two touchdowns.But Dent’s fascinating story—told for the first time in Blood, Sweat, & Bears is more about a young man beating the odds than about a football player racking up statistics.Coming out of a small college with less fanfare than many of his high-profile peers, Dent talks about the inherent disrespect he received, especially early in his career, even though his production rivaled that of most other players at his position.The book, written with veteran Chicago Tribune sportswriter Fred Mitchell, takes the reader behind the scenes, into the huddle and inside the locker room of one of the fiercest, most dominant defenses in NFL history. Playing in the NFL during a time before violent helmet-to-helmet tackles were not forbidden, Dent discusses the direction of the current game in this candid book.“Fans want to see hard hits and collisions,” says Dent. “If the NFL wanted to make the game perfectly safe, they would have the players wearing leather helmets and soft shoulder pads. But who would want to spend their money to come out and watch that?”Dent also discusses Hall of Fame teammates, such as Walter Payton, and his at-times turbulent relationship with Coach Mike Ditka.A quarter of a century after the brash Bears filmed The Super Bowl Shuffle music video before winning the championship game, Dent is ready to tell his personal saga, as well as the rest of the intriguing story behind the 1985 Bears.Blood, Sweat, & Bears hits hard… just like its Hall of Fame author!

Richard Dent made quite a name for himself in the National Football League after toiling in relative obscurity at tiny Tennessee State University. The Chicago Bears drafted the then tall and skinny Dent in the eighth round of the 1983 draft. He would grow to 6-5, 265, and go on to become the storied franchise’s all-time leader in quarterback sacks. In 1985, Dent led the NFL with 17 quarterback sacks and the Bears went on to wallop the New England Patriots 46-10 as he was named the Most Valuable Player in Super Bowl XX. That vaunted Bears unit led by defensive coordinator Buddy Ryan also included Mike Singletary, Dan Hampton, Steve McMichael, William “Refrigerator” Perry, Otis Wilson, Wilber Marshall, Dave Duerson, Gary Fencik, Mike Richardson and Leslie Frazier. Dent later joined the San Francisco 49ers as a free agent in 1994, although he missed most of that season with an injury.He returned to the Bears in 1995 before joining the Indianapolis Colts the next season.Dent retired after spending the 1997 season with the Philadelphia Eagles. Dent had 141 quarterback sacks in 203 career games, including 151 starts.He also intercepted 8 passes, returning them for 89 yards and 1 touchdown, and he recovered 13 fumbles.In 1990, he returned a fumble for 45 yards and a touchdown. Since retiring from pro football, Dent has been very active in the Chicago community. The Make a Dent Foundation, a 501 (3) (c) organization, was founded over 14 years ago, with the primary goal of improving the lives of children.Over the years, the foundation has donated hundreds of thousands of dollars to worthwhile organizations such as The Illinois Literacy Foundation, Big Brothers and Big Sisters of Kentucky, Colin Powell’s America’s Promise, Angels on the Fairway, United Negro College Fund, the Better Boys Foundation, and many others. By partnering and raising funds for these organizations, the Make a Dent Foundation has helped many people in need achieve their dreams.Since joining the Chicago Tribune in 1974, Fred Mitchell has covered the Chicago Cubs, Bulls and Bears beats, and now writes a weekly column. For the past 16 years, he has been tabbed by the Baseball Writers Association of America to vote for the Hall of Fame. Mitchell has written 10 books, including biographies with Bears Hall of Fame halfback Gale Sayers and Cubs Hall of Famers Billy Williams and Ryne Sandberg. Mitchell also wrote “Playing Through” with Earl Woods, the late father of Tiger Woods, and “Then Ditka Said To Payton” with former Bears lineman Dan Jiggetts. Mitchell received the "Jim Murray Award" as the outstanding sportswriter in 2000 from the American Football Foundation. Born in Cincinnati, Ohio, Mitchell grew up in Gary, Indiana. At Wittenberg University, Mitchell lettered in football and track and was named to the Lutheran College All-America team in 1968 after setting the NCAA College Division record for career kick scoring. He was inducted into Wittenberg’s Athletic Hall of Fame in 1995. In 1999, Mitchell was inducted into the American Football Association’s Minor League Football Hall of Fame. A member of the Wittenberg Board of Directors, Mitchell received an honorary doctorate from his alma mater in 2000 and was named a Wittenberg Fellow in 2001. Mitchell, who has been involved in numerous civic activities, lives in Chicago with his wife, Kim, and son, Cameron.