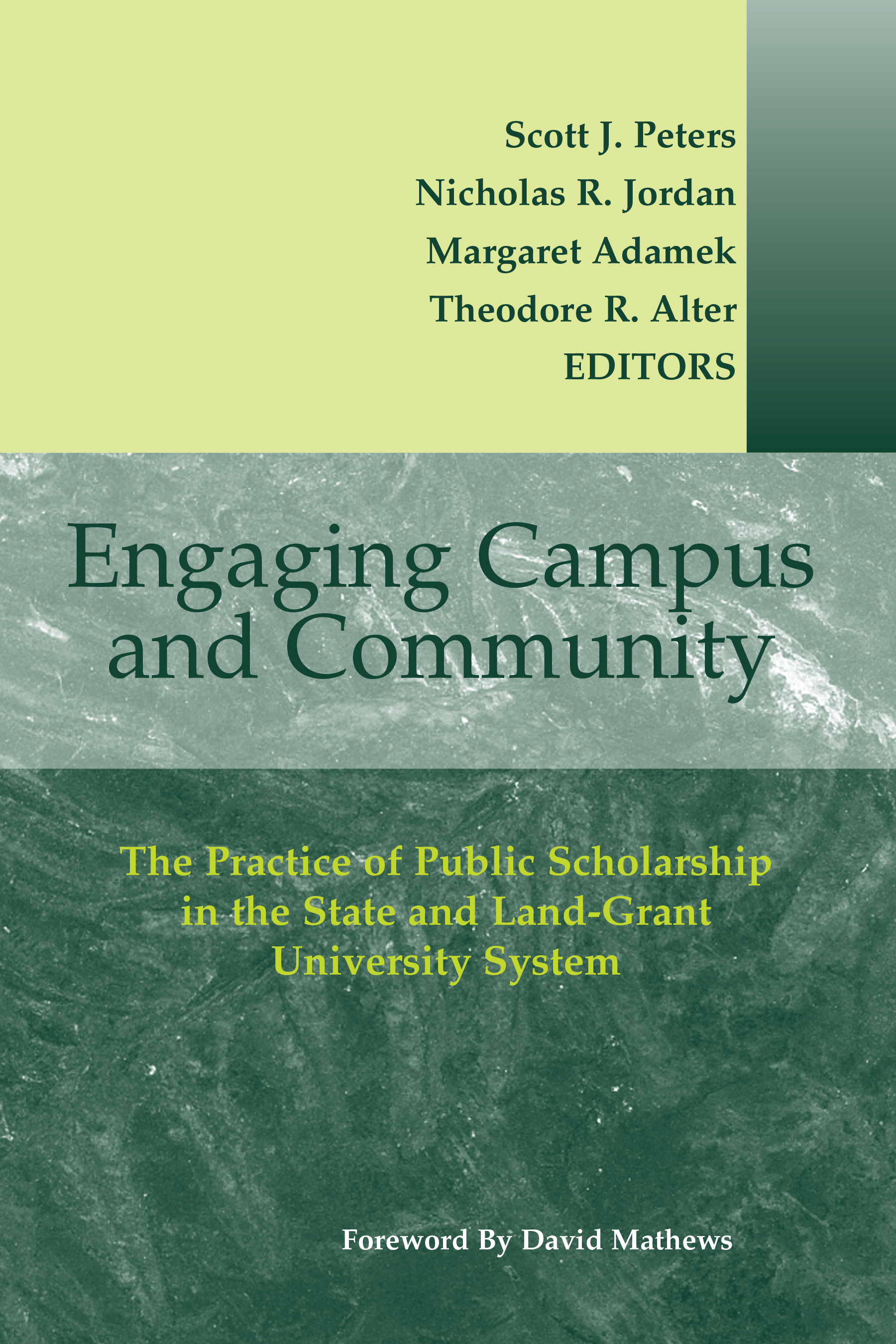 Colleges and universities are increasingly being called on to deepen their engagement in the public work of addressing economic, social, and environmental challenges. How should they respond? Engaging Campus and Community examines the practice of public scholarship as a promising means for academic professionals and students to join with external partners in addressing our most pressing public problems. Based on four years of collaborative research by a team of scholars from six different institutions in the national state and land-grant university system, the book provides the first in-depth qualitative study of the civic dimensions of public scholarship in American higher education. The book presents and analyzes eight case studies of public scholarship involving close community-university engagement in public work initiatives that address the economic, social, and environmental challenges of pursuing agricultural and food systems sustainability. The authors draw lessons from these cases that have broad relevance for the larger movement to renew higher education’s civic mission and work. Chapters in this volume include: “Preface,” David Mathews “Introduction and Overview,” Scott Peters “Community Food Systems and the Work of Public Scholarship,” David Campbell and Gail Feenstra “Organizing for Public Scholarship in Southeast Minnesota,” Scott Peters and Karen Lehman “The North Country Community Food and Economic Security Network: A Profile of David Pelletier,” Margo Hittleman, Scott Peters, and David Pelletier “Bringing Scholarship to the Orchard: Integrated Pest Management in Massachusetts,” Dan Cooley and Bill Coli “Building a Knowledge Network for Sustainable Weed Management: An Experiment in Public Scholarship,” Nicholas Jordan et al. “Teaching as Public Scholarship: Tribal Perspectives and Democracy in the Classroom,” Frank Clancy and Margaret Adamek “Engaging Campus and Community to Improve Science Education: A Down-to-Earth Approach,” Robert Williamson and Ellen Smoak “An Exploration of Participatory Methods in a Youth Outreach Program Linked to University Research,” Marianne Krasny “Public Scholarship: An Administrator’s View,” Victor Bloomfield “Findings,” Scott Peters “Achieving the Promise of Public Scholarship,” Theodore R. Alter

Scott Peters is an assistant professor in the Department of Education at Cornell University. He received a B.S. in education (1983) from the University of Illinois at Urbana-Champaign, and M.A. in public policy (1995) from the University of Minnesota’s Humphrey Institute of Public Affairs, and a Ph.D. in educational policy and administration (1998), also from the University of Minnesota. Before his graduate study, Peters served nearly ten years (1984-1993) as program director of the University YMCA at the University of Illinois. His work there was focused on civic education and community development, pursued through a variety of community-university partnerships. His 1998 book, The Promise of Association, chronicle the history of the University YMCA for its 125th anniversary. Peters’ current research program combines the study of the history of American higher education’s civic mission and work with a study of the contemporary civic education and community development practices of academic professionals. His work has been published in several journals, including Agricultural History, the Michigan Journal of Community Service Learning, the Journal of Higher Education Outreach and Engagement, Higher Education Exchange, and the Journal of Extension. Nicholas Jordan is a professor in the Department of Agronomy and Plant Genetics at the University of Minnesota, and director of Graduate Studies for the Sustainable Agricultural Systems Graduate Minor Program. His background is in plant ecology and evolutionary biology. He is interested in the development of more biologically, socially, and economically diversified and sustainable forms of agriculture. Relevant to this broad interest, his research program addresses ecological questions focusing on fostering the symbiotic relationship between plants and beneficial soil organisms as an essential foundation of sustainable farming. He is also interested in the crucial challenge of combining scientific rationalities with other rationalities in order to create an adequate knowledge base for sustainable agriculture. Currently, he is working to help organize and conduct participatory action research on local coalitions of social groups in support of multifunctional agriculture production systems. Jordan received his B.A. degree in biology from Harvard College, and his Ph.D. in botany and genetics from Duke University. Margaret Adamek currently serves as the special projects director at the Center for Urban and Regional Affairs, University of Minnesota. She is founder and director of the Sugar Project, a research and practice collaborative that explores the linkages between brain and biochemistry, mood and behavior disorders, and the contemporary American diet. For the last four years, she co-directed the Northern Lights Leadership for Institutional Change initiative and a national research initiative on higher education reform in the land-grant university system. Her interests include systems and social change, integration of multicultural philosophies as the basis for institutional transformation, and linkages between food, behavior, and the environment. For the last three years, she served as the chair and director of the national Food Systems Professions Education initiative. This Kellogg Foundation-sponsored institutional reform project involved over 120 institutions of higher education and focused on the reinvigoration of the civic, community, and agricultural dimensions of the land-grant university. She has worked for many years with traditional Native American communities on a variety of issues, including tribal government reform, protection of sacred resources, and cultural education for non-Indian people. Adamek is currently pursuing a doctorate in community development at the University of Minnesota. She holds a baccalaureate degree from Carleton College in African/African American Studies and French Civilization and Literature.