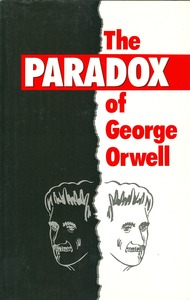 The Paradox of George Orwell

What kind of man was George Orwell, whose Nineteen Eighty-Four, Animal Farm, and many essays are known to millions, but whose character is an enigma? Who was this person who wrote under a pseudonym and wanted no biographies of him written?

Orwell was an intellectual who continually damned intellectuals. He was a leading political writer despite his disgust with politics and an ardent believer in socialism despite his contempt for most socialists. He deplored violence, yet fought in the Spanish Civil War. In chronically poor health, he performed extraordinary physical labor.

Richard J. Voorhees shows how Orwell rebelled against contemporary politics, yet had too much sense of responsibility to be anarchistic. He portrays Orwell's horror of modern tyrants, together with his unstinting use of his abilities to fight them. He describes Orwell's dedication to socialism and his revulsion from some of its by-products.

From this skillful study of a controversial figure there emerges a picture of a crusader for democracy, a shrewdly independent thinker who deals with the major issues of our time.

Richard J. Voorhees, now professor emeritus, taught literature and composition at Purdue University from 1946 through 1982. Contemporary British fiction is his special interest. Raised in Chicago, he received B.A. and M.A. degrees from the University of Illinois and a Ph.D. from Indiana University. He has written on Orwell for The South Atlantic Quarterly, Prairie Schooner, The Commonweal, College English, and The Canadian Forum.