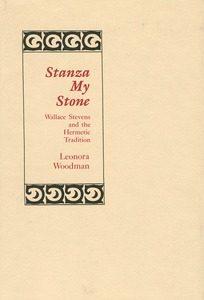 Wallace Stevens and the Hermetic Tradition

Through the poetry of Wallace Stevens has been studied from a variety of critical perspectives, most critics share the view that Stevens is a secular poet who refuses religious definitions of man and nature. His major subject, it is thought, is poetry, which in its broadest sense stands as synecdoche for the possibilities that inhere in the mind engaged in creating itself even as it creates its art. This study confirms that Stevens’s major concern is indeed poetry, but it proposes that when Steven speaks of the peerless poem qualified by such epithets as “grand” or “central” or “ultimate” or “supreme,” he is not referring to the objective artifact with which we commonly associate the term but is rather outlining the contours of the Hermetic transcendental Man encountered in the course of spiritual meditation. Accordingly, art, in Steven’s view, is a secondary or “lesser” form eventually superseded by the soul metamorphosed into an image of deity – what Stevens called “pure poetry” or the “ultimate poem.”

Woodman traces the appearance of the Heavenly Man of spiritual alchemy in “Owl’s Clover,” Steven’s longest poem, and in the figure of the hero, a major motif in Stevens’s work from the thirties on. She then considers the alchemical tradition to clarify the uses Steven made of its symbolic system. Succeeding chapters consider the relation of the Hermetic Man to the “supreme fiction”; the spiritual reciprocity between imagination and reality – variations of the Hermetic doctrine of correspondence; the decreation and recreation of self and nature that constitute the metamorphic stages of Hermetic meditation; and the Hermetic theory of transcendental perception that lies at the core of Steven’s account of human transformation. The final chapter turns to Steven’s native Pennsylvania to suggest the means by which he may have encountered the Rosicrucian tradition (the corporate form of modern Hermetism) that appears to have profoundly influenced his creative life.