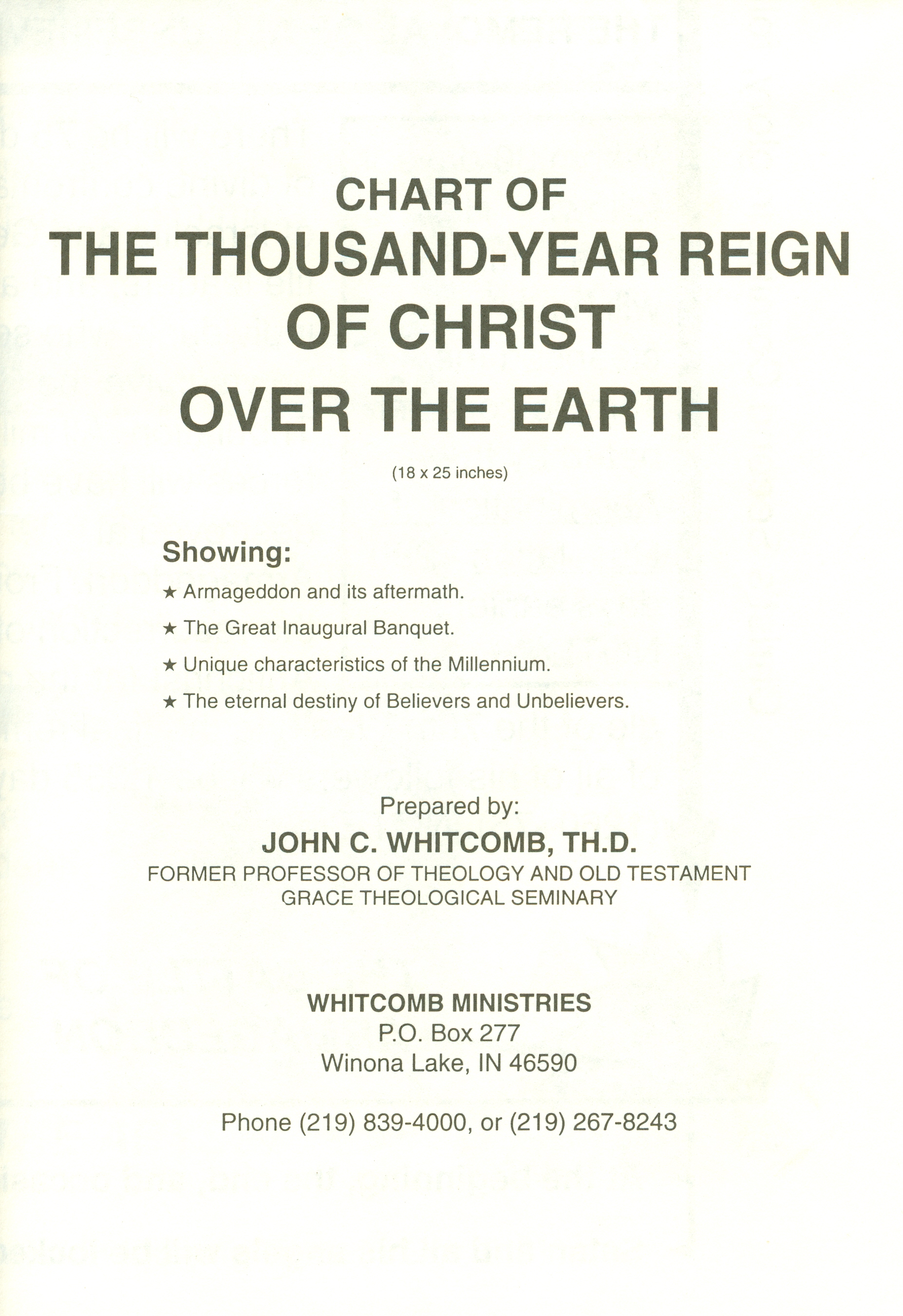 Chart The Thousand Year Reign of Christ Over the Earth (Paper)

This study graph shows Armageddon and its aftermath, The Great Inaugural Banquet, Unique characteristics of the Millennium, The eternal destiny of Believers and unbelievers.

John C. Whitcomb served as professor of theology and Old Testament at Grace Theological Seminary, Winona Lake, Ind., for 38 years. He holds a with a B.A. degree, majoring in ancient and European history from Princeton University. At the end of his freshman year at Princeton, he was led to Christ by Donald B. Fullerton, a former missionary to India. In 1951, he was graduated from Grace Theological Seminary with the B.D. degree (high honors) and received the Th.M. degree in 1953 and Th.D. degree in 1957 from the same institution. From 1951 to 1990, he taught in the Department of Old Testament and also in the Department of Christian Theology, in which he served as chairman for many of these years. For 20 years he also served as director of doctoral studies, and for 10 years as editor of Grace Theological Journal. From 1962 to 1990, he was president of the board of Spanish World Gospel Missions, Inc. and served on the board of trustees of Grace Brethren Foreign Missions (now Grace Brethren International Missions) for 20 years, several of these years as chairman of the board. Dr. Whitcomb lived in China three years (1927–30), served his country in Europe (1944–46), visited mission stations in Peru (1950), helped in the establishment of a church in Puerto Rico under the auspices of Grace Brethren Foreign Missions (1958–59); and an extension program for Grace Seminary in France (1958–89); and has lectured in Canada, Latin America, Western Europe, Central African Republic, the Far East, and in most states of the United States. He has been on two study tours of the Holy Land (1952, 82). Currently, he is president of Whitcomb Ministries, Inc., and founder and professor of Christian Workman Schools of Theology. He has taught the Old Testament and theology for more than 50 years, and is widely recognized as a leading Biblical scholar. Dr. James L. Boyer (1911-2003) taught Greek and New Testament at Grace Theological Seminary, Winona Lake, Ind. from 1952 until his retirement in 1976. He authored For a World Like Ours: Studies In I Corinthians and produced chronological charts on the intertestamental period and the New Testament.

Other Titles from BMH Books