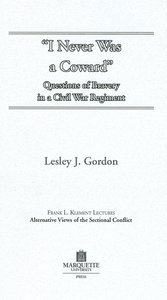 "I Never Was a Coward"

Questions of Bravery in a Civil War Regiment

In popular imagination, the American Civil War remains a conflict in which all soldiers acted out of personal bravery and self-sacrifice. Communal memory and historical scholarship have insisted that every soldier was a hero. But there were men, not paragons but humans, who did not perform admirably or heroically. Many were shirkers, skulkers and deserters; those who fled from battle, or slipped away during long marches. I Never was a Coward focuses on a single northern regiment to highlight broad questions about bravery and cowardice.

The wartime record of the 16th Connecticut Infantry Regiment includes candid accusations, confessions and observations of cowardice in battle, in camp, at home, and in prison. By examining letters, dairies and newspapers, we learn firsthand how this regiment defined and redefined cowardice. Their fascinating story provides fresh insight into a topic rarely explored by Civil War historians.

Lesley J. Gordon is the Charles G. Summersell Chair of Southern History Professor at the University of Alabama. She earned her PhD from the University of Georgia. Her publications include Broken Regiment: The 16th Connecticut’s Civil War; General George E. Pickett in Life and Legend; Intimate Strategies of the Civil War: Military Commanders and their Wives (with Carol K. Bleser); This Terrible War: The Civil War and its Aftermath; Inside the Confederate Nation: Essays in Honor of Emory M. Thomas (with John C. Inscoe) and American Discord: The Republic and its People in the Civil War Era (with Megan Bever and Laura Mammina).