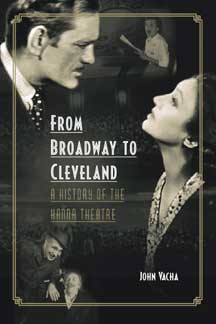 From Broadway to Cleveland

A History of the Hanna Theatre

A noteworthy history of Cleveland’s showcase for touring shows

Built by Daniel R. Hanna as a tribute to his theater-loving father, Marcus Hanna, the Hanna Theatre opened its doors on March 28, 1921, with an adaptation of Mark Twain’s The Prince and the Pauper starring William Faversham. Billed as a “Broadway-style theater,” the Hanna was located not on Euclid Avenue but around the corner on the side street of East 14th. Its interior decor was opulent, finished in what was described as a combination of Italian Renaissance and Pompeian style, and the stage was described as “large enough . . . to present the best plays offered; but intimate enough to present the quietest comedy or drama to the best advantage.”

For three generations of Clevelanders, “I saw it at the Hanna” was a bragging point that could only be trumped by “We saw it in New York.” During its first two decades, the Hanna hosted such touring Broadway shows as The Student Prince and the Marx Brothers in Animal Crackers. There were also significant world premieres, including Noel Coward’s Design for Living, starring Alfred Lunt and Lynn Fontaine and Coward himself, and Maxwell Anderson’s High Tor, with Burgess Meredith. The postwar era brought the golden age of the American musical theater to the Hanna, from Oklahoma! to Hair. The mirrors in its star dressing room have reflected the images of Ethel and John Barrymore, Helen Hayes, Katharine Cornell, and Henry Fonda. Since reopening a decade ago as a cabaret theater, the Hanna boasts the longest run in Cleveland theatrical history with Tony ’n’ Tina’s Wedding.