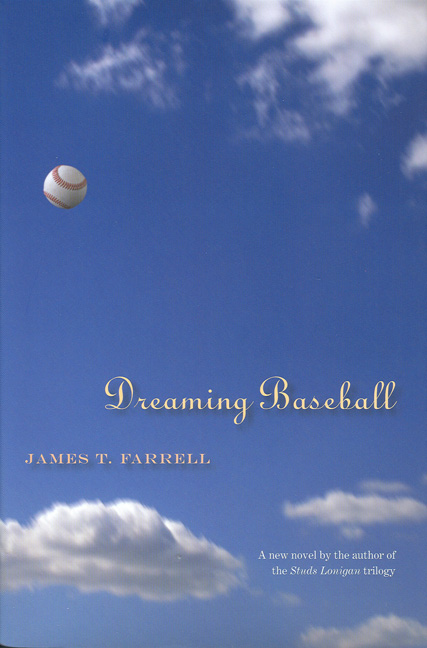 Much like author James T. Farrell, Mickey Donovan—the main character in Dreaming Baseball—grew up on the South Side of Chicago dreaming of becoming a star for the White Sox. Donovan’s childhood dream came true in 1919 when he made the team. Despite the fact that he spent most of his rookie season on the bench, it was truly a magical year—until the Black Sox scandal turned it into a nightmare.

James T. Farrell dreamed of one day playing second base for his hometown Chicago White Sox, but, failing that, he became one of America’s great novelists. Farrell loved the game of baseball with the same passion he brought to the celebrated Studs Lonigan trilogy.

In the 1950s Farrell signed an agreement with A. S. Barnes to write two baseball books. The first book published from this deal was My Baseball Diary, in 1957, still considered one of the very best fan books on baseball. The second baseball book was to be a novel about the infamous 1919 Black Sox scandal. Though several draft s of the novel were written, it remained unpublished—until now. Editors Ron Briley, Margaret Davidson, and James Barbour worked with the various manuscript drafts to see Farrell’s vision to print as Dreaming Baseball.

Farrell’s Donovan speaks, feels, and dreams for all baseball fans in this wonderfully rich novel about our favorite American pastime.

James T. Farrell (1904–1979) was the author of more than twenty-five novels, short stories, and critical works as well as a devoted baseball fan. A prolific writer for five decades, he is often regarded as a master of American naturalism.

Ron Briley is assistant headmaster at Sandia Preparatory School in Albuquerque, New Mexico. He is also adjunct professor of history at the University of New Mexico-Valencia campus.

James Barbour, Ph.D. UCLA, has written on Melville, Hemingway, baseball, and other topics, and his work has been published in numerous journals.