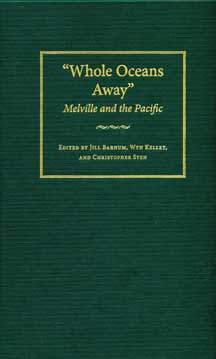 Melville and the Pacific

Essays on Melville and the culture of the Pacific

“Like the young Melville, those who imagine Polynesia from the perspective of Europe or North America tend to envision a tropical garden set in a shining sea. But the Pacific experienced by a runaway American sailor in an earlier century presents a different picture, and the Pacifi c experienced by indigenous peoples of today a different one yet.”— from the Introduction

Herman Melville had a lifelong fascination with the Pacific and with the diverse island cultures that dotted this vast ocean. The essays in this collection articulate the intersection of Western and Pacific perspectives in Melville’s work, from his early writings based on ocean voyages and encounters in the Pacific to Western modes of thought in relation to race and national identity. These essays interrogate familiar themes of Western colonialism while introducing fresh insights, including Melville’s use of Pacific cartography, the art of tattooing, and his interest in evolutionary science.

Jill Barnum was professor of literature and writing and Morse-Alumni Distinguished Teaching Professor at the University of Minnesota. She published Melville Sea Dictionary: A Glossed Concordance and Analysis of the Sea Language in the Nautical Novels of Herman Melville (1982) and Encyclopedia of American Literature of the Sea and Great Lakes (2001).