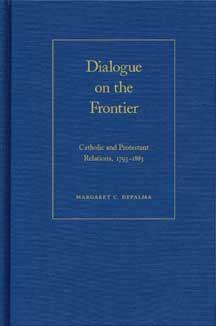 Dialogue on the Frontier

A discussion of the expansion of Catholicism in the West

Dialogue on the Frontier is a remarkable departure from previous scholarship, which emphasized the negative aspects of the relationship between Protestants and Catholics in the early American republic. Author Margaret C. DePalma argues that Catholic-Protestant relations took on a different tone and character in the late eighteenth and early nineteenth centuries. She focuses on the western frontier territory and explores the positive interaction of the two religions and the internal dynamics of Catholicism.

When Father Stephen T. Badin arrived in the Kentucky frontier in 1793, intent on expanding Catholicism among the pioneers, he brought only his faith and courage, a capacity to work long hard hours, and an understanding of the need for meaningful interaction with his Protestant neighbors. He established the groundwork for the later arrivals of Edward D. Fenwick, the first bishop of Cincinnati, and Archbishop John B. Purcell. The interaction between these priests and the frontier Protestant community resulted in a dialogue of mutual necessity that allowed for the growth of the region, the nation, and the church. The ministries and stories of these three priests are representative of the problems the Catholic Church faced in overcoming anti-Catholic sentiment and the solutions it found in its efforts to lay a permanent foundation in the West.

This book will be of great interest to scholars of the early republic and religious life and of the urban landscape of the Midwest.

Margaret C. DePalma is currently a writer and editor at the National Archives and Records Administration in Washington, D.C. She served as coauthor with John W. Altman on a series of case studies in entrepreneurship published by Babson College in Babson Park, Massachusetts.