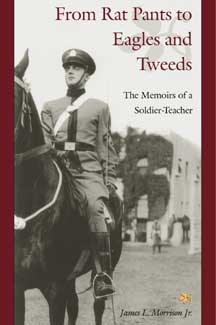 From Rat Pants to Eagles and Tweeds

Memoirs of a Soldier

From Rat Pants to Eagles and Tweeds is a firsthand account of James Morrison’s experiences growing up in the segregated South, his attitudes and approaches to the military as a cadet at the Virginia Military Institute, and his years as a history teacher at York College in Pennsylvania. Morrison attended several army service schools; served as a midshipman before and after World War II; completed several overseas tours, including service as an American adviser to a Vietnamese Infantry division in 1964–65; obtained an M.A. in history from the University of Virginia and a doctorate from Columbia University; and served on the history faculty at the United States Military Academy at West Point for eleven years. He discusses how, during his army career, he had to cope with dramatic organizational innovations, major technological advances, and racial and gender integration. Morrison writes with clarity, wit, and insight, sharing his critiques of the army, West Point, and teaching, along with his assessment of the present status of American life and his attitudes toward the quality and effectiveness of army officer education and training. He analyzes some of the pitfalls and the strengths of preparing U.S. military organizations for service now and in the future, and he furnishes the reader with insights into how history is taught at a typical American college. From Rat Pants to Eagles and Tweeds is a significant contribution to the study of American military history and will be of interest to military officers, military educators and historians, and alumni of the Virginia Military Institute and West Point.