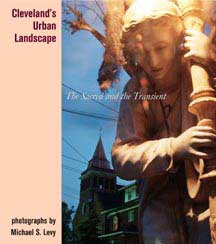 The Sacred and the Transient

“Every city has its own textures, its own special relationship to land and water, its own light, its own night. Cleveland’s history-haunted, labor-encrusted, smoke-grimed nights is a place as varied in texture as any in America. It echoes in the interior darkness of the camera lens during lonely, leisurely hours as Levy wanders the city. Levy’s photos seek realities that can spark some recognition at a subconscious level, a combination of eye and time and device that suddenly, sometimes, generates a new type of seeing.”—Douglas Max Utter, Foreword

In 1999 Cleveland Plain Dealer photographer Michael S. Levy was given an assignment by his editor to provide images for a feature article about research being conducted by members of Cleveland State University’s Center for Sacred Landmarks. Cleveland’s Urban Landscape is the product of that assignment.

The photographs in this book are an exploration of Cleveland’s landscape from mundane objects like fire hydrants and billboards to the magnificent—a sunset over Lake Erie or the steeple of one of the many historic churches scattered across the city. Levy’s images are full of life, movement, mystery, sadness, and beauty as he contrasts disparate elements. Through Levy’s photographs, we see the history of Cleveland as it changes from one era to another. Cleveland’s Urban Landscape will appeal to those interested in photography or Cleveland’s heritage.

Michael S. Levy was a photographer for the Cleveland Plain Dealer for 16 years. Named Ohio’s Photographer of the Year by the Ohio News Photographers Association on five different occasions, most recently in 2005, Levy left the newspaper and started Mike Levy Photography, LLC, where he is currently working. He is the author of Revelations (Kent State University Press, 2008).